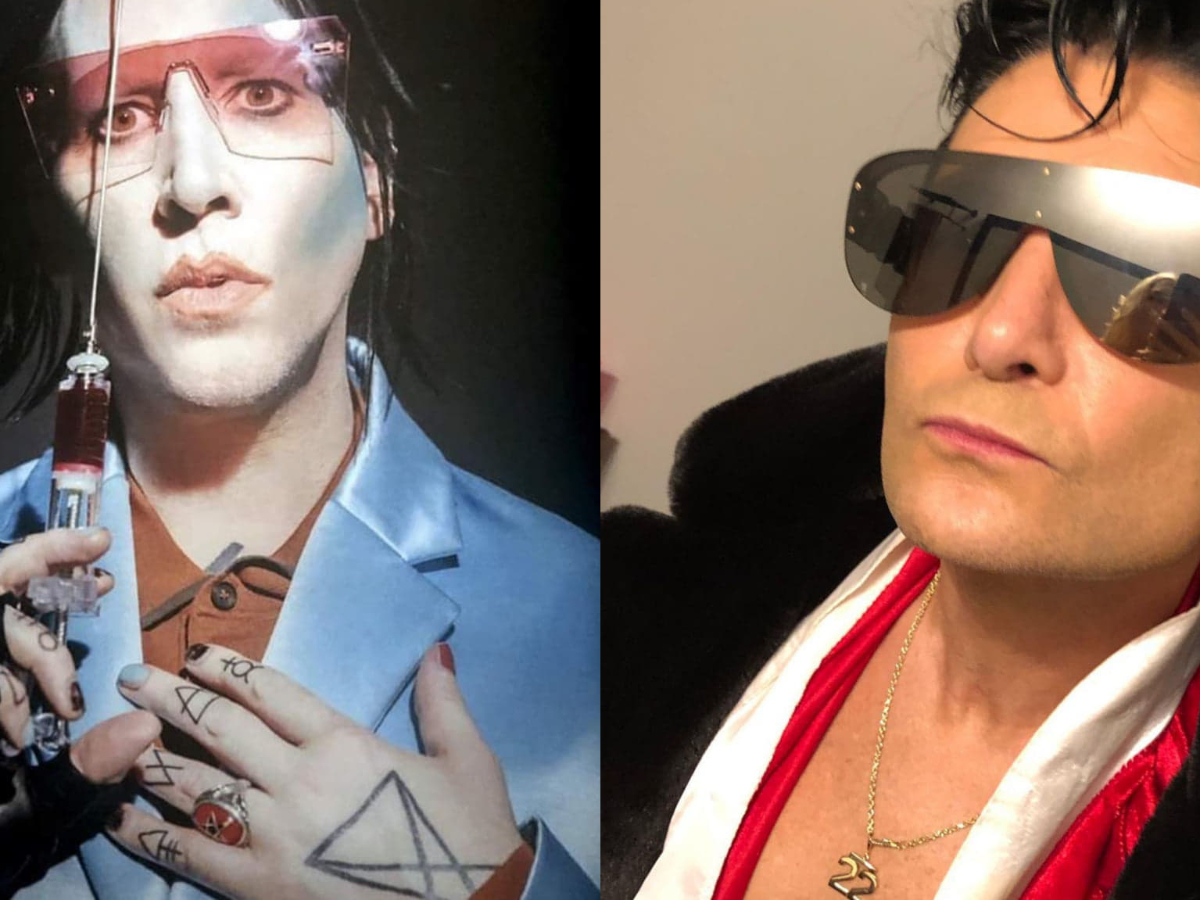 It’s no secret that Marilyn Manson and Corey Feldman don’t get along and now allegations that Feldman made against the shock rocker are getting a new look in light of Evan Rachel Wood’s and four other women’s recent statements. Corey Feldman has long been in the spotlight for speaking out about childhood sexual abuse in Hollywood and sharing what he says is his firsthand knowledge of abuse that not only he endured, but that of his good friend and former co-star in many eighties teen movies, the late Corey Haim. A war ensued between Feldman and Corey Haim’s family who said that Feldman had no right to speak about abuse that may or may not have occurred in Corey Haim’s life as he was no longer here to make his own statements.
Corey Feldman disagreed.
RELATED: Corey Feldman Continues To Get Support On GoFundMe After Truth Campaign Ends
Feldman countered that Corey Haim’s alleged abuse  (including statements that he says Corey Haim made to him) is part of the entire story and point to the toxic atmosphere that Hollywood has maintained for its child and teen stars.
Corey then took it one step further and alleged that the actor Charlie Sheen raped Corey Haim while the two filmed the movie, Lucas. Charlie Sheen denied the allegations and pointed to Corey Haim’s mother for his defense, as she has publicly named the deceased friend of Corey Feldman, Dominick Brascia as Corey Haim’s one and only abuser.
Corey Haim never publicly outed Charlie Sheen as his abuser; however, he did speak about being abused and that Corey Feldman knew about it during an episode of the A&E series The Two Coreys. He referred to his abuser as being Corey Feldman’s friend. Corey countered that Corey Haim was aware that he too was being sexually abused within the industry.
RELATED: Corey Feldman To Extend My Truth: The Rape Of 2 Coreys Screening, Tickets On Sale Now
Corey Haim is not here to set the record straight — whether that record backs up Corey Feldman’s claims, names Charlie Sheen as one of his abusers, or agrees with Judy Haim‘s statements that her son told her everything and Dominick Brascia was his only abuser.
The tension between Corey Feldman and Judy Haim rose to unprecedented heights when he named his documentary: (My Truth) The Rape of Two Coreys after Judy Haim explicitly stated that she didn’t want her son, Corey Haim, to be part of his story, whether that was in media, a book, a movie, or a tweet.
If that wasn’t enough to set off a war that would put the Hatfields and McCoys to shame, things took a sinister turn: Enter Marilyn Manson.
When the Harvey Weinstein scandal broke, it was Marilyn Manson’s ex-fiance who spoke out the loudest. While Rose McGowan was on Twitter gathering her Rose Army and demanding justice for herself and Weinstein’s other victims, Corey Feldman was on tour with his wife and his band Corey’s Angels. After being asked to speak out on the Weinstein scandal, Feldman decided it was the right time to go forward with his Hollywood abuse story. That also included Corey Haim’s story, much to the chagrin of Judy Haim.
Corey Feldman feared he was being silenced on all fronts. While still on tour, he described being nearly killed as two semi-tractor trucks nearly ran him over while crossing the street with his terrified wife, Courtney Feldman, right behind him.
Feldman told his wife, band, and crew that the tour was over. He was in fear for his life and would find the best way to tell his story to help expose a high-profile pedophile ring.
Corey Feldman than became increasingly attacked on social media by a group that had ties and direct communication with Judy Haim. Videos were made with the intent of ‘exposing’ Corey Feldman as the real Hollywood abuser. Then Corey Feldman discovered something that greatly disturbed him.
Some of the women who were part of Corey’s Angels and lived in his home were friends with Marilyn Manson. Photos and videos surfaced of the women in Manson’s house and Feldman became even more terrified.
He believed that Marilyn Manson was part of the network to destroy his life, silence him, and keep him in fear.
He has repeatedly made allegations that several of his former ‘Angels’ were working with Marilyn Manson to keep him from exposing Hollywood predators and instead, set him up to be the predator.
The allegations seemed far-fetch to many, but now with Evan Rachel Wood and the other women clearly stating that Marilyn Manson used ‘illegal’ practices such as putting spyware on phones, tracking emails, and collecting background information to blackmail them into silence, people are wondering if Corey Feldman’s fears weren’t far off.
Evan Rachel Wood stated the following on April 23, 2019, when she testified before the California Senate for the passing of the Phoenix Act that would allow victims of domestic violence and abuse to have up to ten years to press charges on their abuser.
At the time of this testimony, Evan Rachel Wood did not formally name her abuser. On February 1, 2021, she named Brian Hugh Warner, aka Marilyn Manson as the man who terrorized her.

Corey Feldman quickly tweeted his support for Evan Rachel Wood and created a long Twitter thread where he brought up his own allegations against the rocker.
You may see Corey Feldman’s Twitter full thread about Marilyn Manson by clicking on it below.

THE ABUSE THIS PSYCHO HANDS OUT, WAS KNOWN 2 ME BY THE SPIES HE SENT N2 MY LIFE, 2 RUIN MY TOUR BY PLACING #JACKIEVONRUDEBREATH & #POEINASNAKE N2 MY LIFE, WHICH GAVE HIM THE ABILITY 2 MANIPULATE MY TOUR THRU THESE “FALSE ANGELS” INCLUDING PLANTING HIS BUS DRIVER WADE ON MY TOUR
— Corey Feldman (@Corey_Feldman) February 1, 2021

What do you think about the allegations against Marilyn Manson and the claims that Corey Feldman has made that Manson sent spies into his home to destroy him?
Advertisement