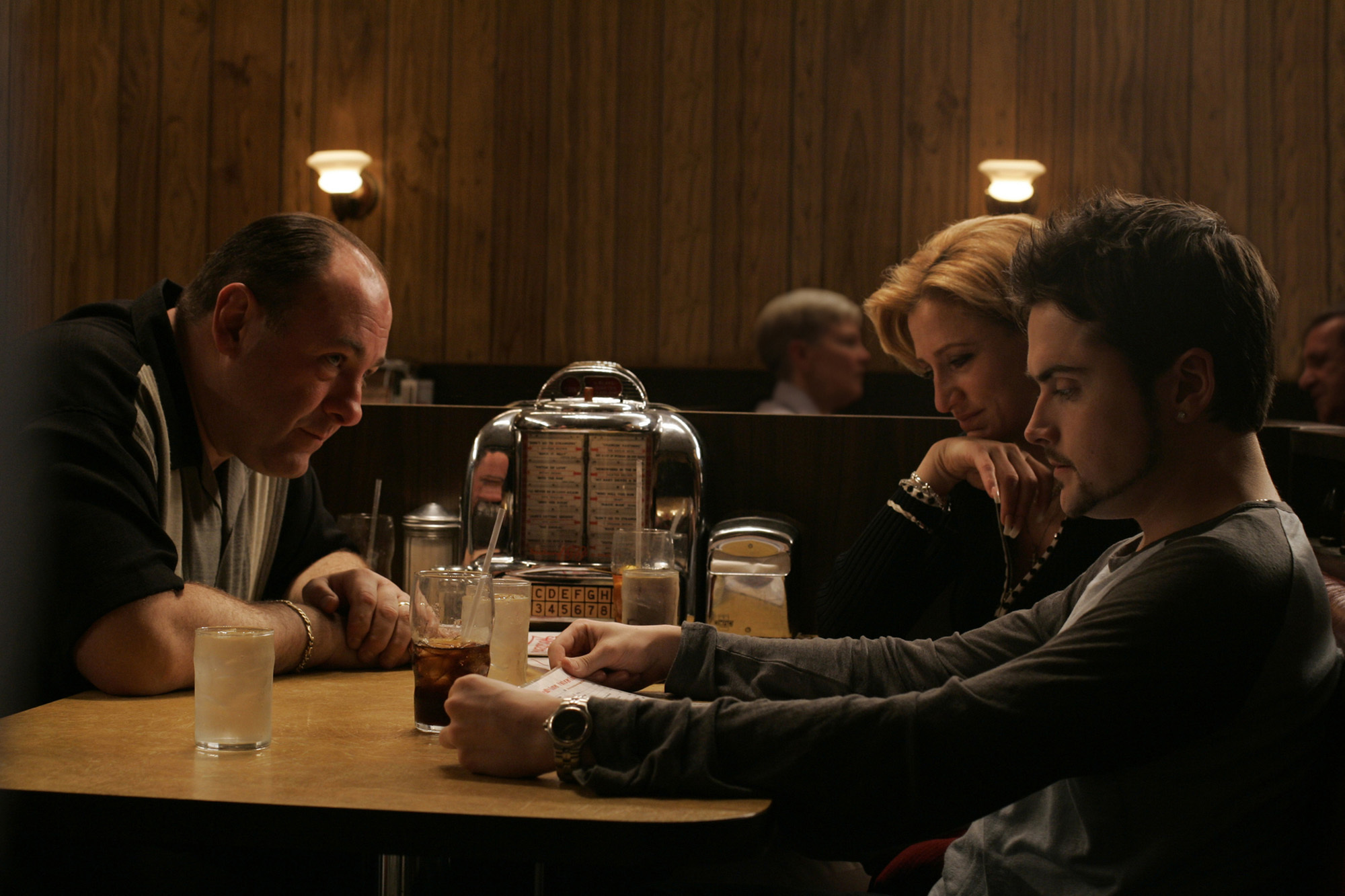 Exactly 14 years ago, millions frantically yelled, thinking they lost their cable connection as HBO’s “The Sopranos” ended its final season — thanks to creator David Chase inventing one of the most brilliant, suspenseful last scenes in television history.

That finale, “Made in America,” draws to an epic and ambiguous close the story of northern New Jersey crime boss Tony Soprano, played by the late, remarkable James Gandolfini.

You know the scene: Journey’s “Don’t Stop Believin’” plays as Tony, Carmela (Edie Falco) and their son, A.J. (Robert Iler), eat the best onion rings in Jersey at Holsten’s. The song cuts off at “Don’t stop” and we see 10 seconds of black screen before the final, silent credits roll.

Now, with years of hindsight and a prequel, “The Many Saints of Newark,” on the horizon, the mystery behind Tony’s fate has been chipped away at — and it’s much more subtle than “Saw” meeting “The Godfather.”

Falco revealed on Chuck D’s New York Knicks podcast that an alternate ending to the show was filmed with her and Gandolfini in 2010 in an effort to attract LeBron James to play in Madison Square Garden — even though she didn’t know who he was. Similar to the end of “Goodfellas,” it depicted Tony’s life in witness protection, likely thanks to the symbiotic relationship he had established with federal agent Dwight Harris (Matt Servitto). Despite heightened fanfare and speculation, the scene was never included in the show’s canon and simply remains an unused, alternate-ending take.

So, what actually happened to Tony?

One television’s most iconic show’s has an ending that’ still debated to this day.WILL HART / HBO

In the show, Tony previously acknowledged to Dr. Jennifer Melfi (Lorraine Bracco) that “there’s two endings for a guy like me, a high-profile guy: dead or in the can.”

Thanks to the anticipated testimony of Carlo Gervasi (Arthur J. Nascarella) after his troublemaking son Jason was arrested, Tony is left preparing for an indictment that would likely put him behind bars for the rest of his life — so even if Soprano lives past dinner, his old ways are essentially over, symbolizing a proverbial death.

Although, it doesn’t appear Tony lives to see a trial.

As the ’80s rock song rings throughout the diner, there is a recurring shot of a man seated at the eatery’s counter constantly looking back at Tony. He’s credited as Man in Members Only Jacket, a reference to the first episode of Season 6, “Members Only,” which saw FBI informant Eugene Pontecorvo (Robert Funaro) of Soprano’s crew commit a very graphic suicide after neither party allowed him to retire with family to Florida.

The final moments of the show see that man walk into the Holsten’s bathroom, about 30 seconds before the cut to black. The move mirrors Tony’s favorite scene in “The Godfather,” when Michael Corleone takes a planted gun behind a restaurant’s toilet to avenge his father’s attempted assassination.

While Members Only is in the bathroom, Meadow (Jamie-Lynn Sigler) parallel parks successfully after many false starts. She runs toward the entrance of Holsten’s as Tony looks up right before … the end.

If Tony was clipped at that moment, it would align with the shot continuity that Chase, who directed only the first and final episodes of the series, had selected.

The theme of family appears throughout “The Sopranos,” with many meanings.Alamy Stock Photo

Tony is the first of his family to arrive at Holsten’s, and several people enter afterward, including Members Only. Each time someone comes in that front door, a bell rings and a close-up of Tony’s face is shown to visualize his point of view to the audience.

In the episode’s closing seconds, that bell is heard, as Meadow is implied to be entering the restaurant. The camera cuts to Tony, presumably as Members Only emerges from the background, gun in hand, before the show’s blackout. That silent darkness becomes Tony’s point of view, something the show’s final season symbolized on multiple occasions.

“You probably don’t even hear it when it happens,” Bobby Baccalieri (Steven Schirripa) tells Tony a few episodes before, in “Soprano Home Movies,” as the duo share a morbid conversation about how they could perish. In “The Blue Comet,” the penultimate episode of the series, Bobby is gunned down on the orders of an opposing mob boss. Later, Tony holds the gun that now deceased Bobby gave him for his birthday and flashes back to the “Don’t even hear it” line.

Both Silvio (left) and Bobby (right) serve as examples of an on-screen mob hit done in silence.Courtesy Everett Collection

Another instance of silence surrounding a mob hit is in “Stage Five,” when consigliere Silvio Dante (Steven Van Zandt) has dinner with Gerry Torciano (John Bianco) and a shellshocked hush emerges while a gunman opens fire on Torciano.

Last year, Chase may have slipped up in interviews. After a decade-plus of refusing to explain the final scene, he referred to it as Tony’s death.

During a leaked interview for his book “The Sopranos Sessions,” Chase inadvertently revealed the outcome when co-author Alan Sepinwall asked: “When you said there was an endpoint, you don’t mean Tony at Holsten’s, you just meant, ‘I think I have two more years’ worth of stories left in me.’ ”

Chase responded “Yes, I think I had that death scene around two years before the end … But we didn’t do that.”

“You realize, of course, that you just referred to that as a death scene,” co-author Matt Zoller Seitz then said.

It didn’t take the accidental admission to put the pieces together, though.

The entire sixth season revolves around Tony’s failures, even leading into the last scene.

Tony sees he could not put an end to Christopher’s (Michael Imperioli) rampant drug use in “Kennedy and Heidi,” just before killing his cousin, whose former fiancee became an FBI informant.

That’s followed up by A.J.’s attempted suicide in Tony’s pool in “The Second Coming.”

Tony then drains the pool water, which at the show’s beginning he waded in to feed ducks that symbolized his family. The Sopranos are now left with an empty, covered pool during colder weather.

In the last episode, Tony has a silent visit to Silvio in the hospital, who is not expected to regain consciousness, as the boss likely reflects on the situation, which he could have done more to prevent.

One of TV’s finest shows ended with one of the most controversial conclusions of all time. Alamy Stock Photo

He later sees a demented Junior (Dominic Chianese), who throughout the show teases Tony for never having “the makings of a varsity athlete.”

Sure enough, a mural of a local high school football standout is painted on the wall in Holsten’s in the next scene.

Who capped the boss?

A question remains even if he is dead: Who killed Tony Soprano?

Was it a relative of Eugene’s? Did the New York crew not honor the ceasefire? Or did an interior decorator who killed 16 Czechoslovakians get his revenge? Where has Furio (Federico Castelluccio) been all this time?

Not knowing for sure is a symbol in itself. Just as the family and loved ones of other killed-off characters never got their closure throughout the series, neither does Chase’s audience, with the future of both the nuclear and criminal Sopranos family up in the air.

Hopefully, September’s prequel film, which stars Gandolfini’s 22-year-old son, Michael Gandolfini, as young Tony Soprano, will give even more closure to one of television’s most cryptic puzzles.