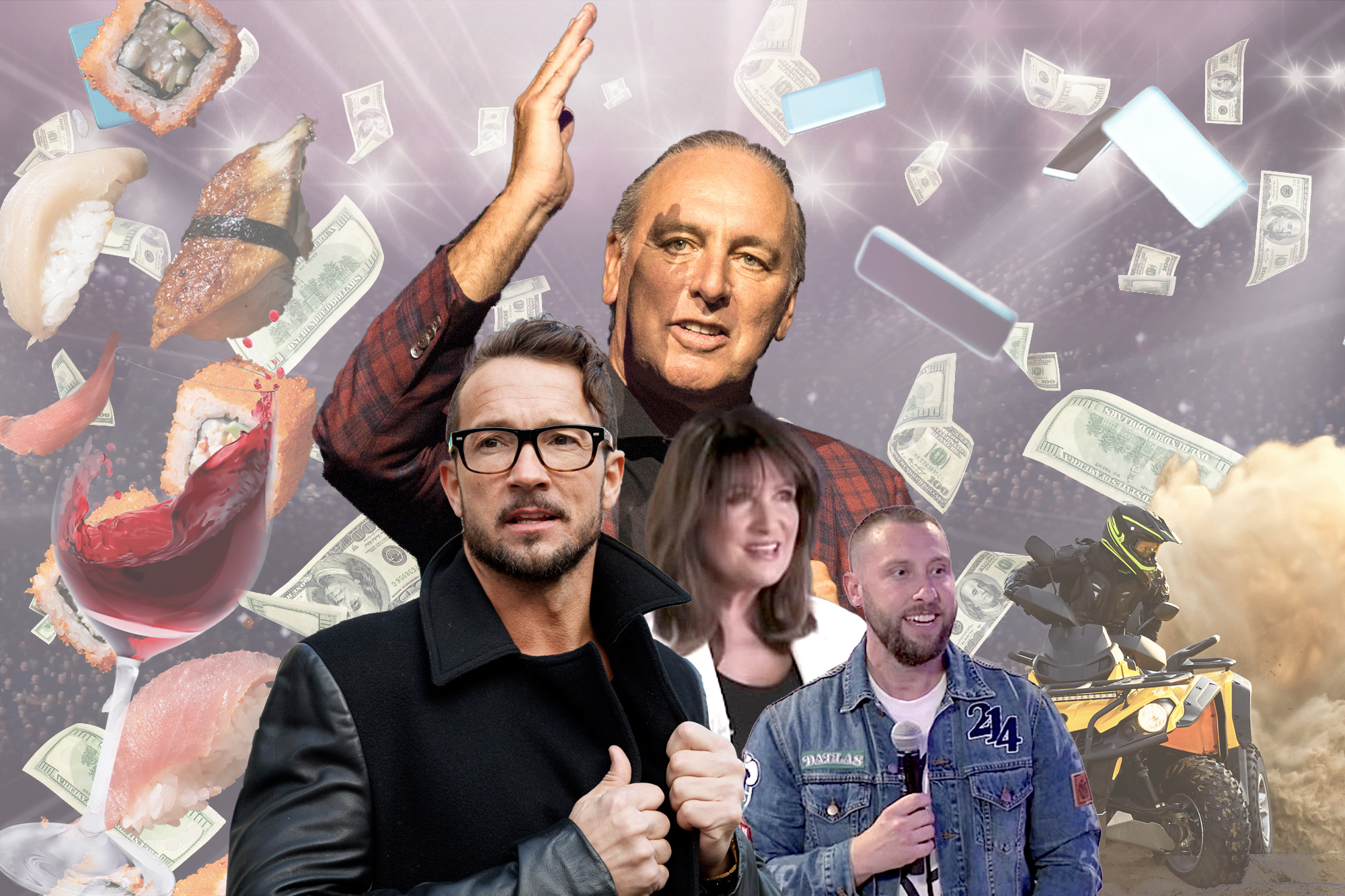 The pastors at scandalized Hillsong Church were anything but humble servants.

As the Australia-based institution continues to come under fire for allegations of “slave labor” and homophobia, ex-congregants and staff are now claiming that pastors used tithe money to help fuel their decadent lifestyles.

At Hillsong NYC, many pastors frequently splurged on fancy restaurant meals, designer clothes and weekly manicures while living in the same Kent Avenue Williamsburg high-rise and zipping around the neighborhood on ATVs, disgusted former members told The Post.

Indeed, it appears once celebrity-beloved star pastor Carl Lentz — who was canned in November after admitting to cheating on his wife — wasn’t the only one with a propensity for costly kicks and million-dollar real estate.

Pastors and staff apparently freely used debit-like “PEX” — or pre-paid expense — cards for whatever their hearts desired, several former members and staff told The Post. The source of the funds came from money donated or “tithed” by members, said former Hillsong LA service pastor Nicole Herman, who personally loaded the funds onto the PEX cards.

“I was instructed to fill them,” said Herman, who helped found the church’s California branch in 2013. “We had a team count the tithes after every service and they would allocate X amount of money for the PEX cards.”

The PEX cards were reloadable and given to volunteers to make purchases for the church and pastors, said Herman, who left the church two years ago. Pastors, including Lentz, got their own Hillsong credit cards in addition to the PEX cards they delved out to their volunteers.

While the pair are now acrimoniously divorced, Herman’s former husband was the CFO of Hillsong LA, “so everything on the PEX cards had to be refilled through him,” she told The Post, confirming “none of that money was coming from anywhere else” besides church tithes. Herman’s ex did not respond to a request for comment.

Former Hillsong congregant Jenna Babbitt, 27, began attending the church’s NYC branch in August 2011 and soon started nannying for various pastors, including Reed and Jess Bogard, who recently left the church under unknown circumstances. She was given access to a card, but for the purposes of buying food for the children she baby-sat.

Recently, lawyers involved in the internal investigation into Hillsong’s East Coast branch — launched after the firing of the adulterous Lentz — contacted Babbitt and asked if she ever had to explain the purchases she made when using PEX cards, a typical step for all business-card use. She was never told to reconcile anything, she said.

Tithe money is by far the biggest funder of Hillsong, according to the church’s various annual reports: Of the $12.7 million Hillsong East Coast made in 2019, 88% of it came from “tithes & offerings.” Over 66% of that revenue went to a combination of staff salaries, benefits and expenses ($3.8 million) and operating expenses including venue rentals, staffing and production costs ($4.9 million). And as a church, Hillsong is exempt from paying income tax in the US.

Hillsong did not return repeated requests for comment on the many instances of excessive spending former members claim they witnessed throughout years of administrative work at the beleaguered church.

During her time in New York, Babbitt watched the cards be used on decadent purchases from luxury presents to Manhattan hotels.

Before every single Sunday service at Hillsong NYC, volunteers would buy huge quantities of food for the pastors, from sushi spreads to Chipotle. Often, staffers such as Babbitt were also asked to roll out the red carpet for visitors.

“I bought a designer purse and $100 or $200 of food from Dean & DeLuca for visiting pastors,” said Babbitt, a Texas native and current Dallas resident.

Babbitt and the other former members interviewed for this piece were not aware of any procedure for or expectation that pastors reimburse the church for personal purchases made with PEX cards. Herman confirmed there was no such reimbursement expectation for personal use of the cards which, she adds, were phased out from Hillsong LA in 2016 after the Bogards — who worked there following their Hillsong NYC stint — were found to be overusing them. Herman could not confirm whether the cards had been discontinued by the other Hillsong chapters.

Babbitt recalls tithing thousands of dollars to Hillsong over her years there — even when she was far too poor to be doing so. At the times she gave, she said, it felt like the right thing, but now the recollection makes her “feel terrible.”

“The exploitation of free labor while these pastors are making bank is just crazy to me,” said Babbitt, who spent months working without pay for the Bogards. She left the church in 2017 and today is a director at a faith space Dallas nonprofit.

Megan Phalon also began attending and volunteering at Hillsong NYC in 2011. From the start of her membership, tithing was a very important part of church, she told The Post, with calls to give made twice a service and a proprietary app created to make digital offering easier.

After a year of membership, Phalon, 30, began baby-sitting for Hillsong New York pastors Kane and Karla Keatinge. “All the pastors lived together in this high-rise apartment complex in Williamsburg,” she said. Average two-bedroom rents in the building hovered at $5,600 a month in 2019, according to StreetEasy.

A lack of documentation

Eventually Kane had Phalon start doing light personal assistance work for him. She was also given access to a PEX card, but was explicitly told to spend it only on his kids — never on herself.

“I was the person Kane would give his receipts to at the end of the month, and try to figure out what was spent on what and why, because they had to send a report,” to Reed Bogard, who was the head of finances, she said. Phalon and the other pastors’ personal assistants maintained an Excel spreadsheet they’d compile the details of monthly purchases into. Only, Kane could never remember what the receipts were for.

“It was like I was baby-sitting him,” she said. “He’d be spending all this money and at the end of the month he’d be like, ‘I don’t know what this was for.’ ”

“He would have all church meetings at St. Balmain so he could use the church card for his business,” Phalon said. “Any time he’d meet with friends, or go out to lunch, so long as they’re talking about church, that’s considered a church expense.” He would give her receipts including his own food and drink purchases, paid for with church money at his own business.

“He’d be spending all this money and at the end of the month he’d be like, ‘I don’t know what this was for.’ ”Megan Phalon

Recently, Phalon — who is now the director of a homeless shelter in San Francisco — also spoke with lawyers involved in the internal investigation. “They were shocked at the things I shared,” she said.

She recalled once being made to charge an approximately $700 “brand-new iPhone without a plan,” to a PEX card, without knowing who it was for. “The pastors bought four-wheeler ATVs to drive around Williamsburg,” she said of one particularly ridiculous PEX card transaction she saw.

Eventually, at some point in 2014, Bogard chastised Kane for the consistent lack of documentation and reasoning in an email Phalon saw. But as far as she knows, he never had his PEX card taken away — Phalon continued to get his purchase receipts.

In response to The Post’s request for comment, Keatinge claimed he was “not privy to the details of how the PEX cards in 2014 were loaded, if they were attached to a specific account, or what was consistently purchased with them, sorry.” He directed The Post to Hillsong’s financial department, which does not have public contact information. Various Hillsong financial team members did not respond to repeated requests for comment.

Watching them live their extravagant lives was difficult for Phalon, and in 2014 she quit nannying and shortly thereafter left Hillsong.

Following their time at Hillsong’s New York and LA branches, the Bogards moved to Texas, to help start and be the lead pastors at Hillsong Dallas. Brandon Walker, 28, helped them plant the branch in 2019.

“I was there from the beginning,” the Houston native told The Post. “There was a lot of toxic activity.”

While Walker never held an official title in his nearly two years at Hillsong, “I was kind of like Reed’s assistant.” He helped with administration and entertaining Hillsong Dallas visitors. In the process, Walker learned that although the institution kept a very tight lock on financial paperwork, the amount of money being thrown around was too excessive to be kept a secret, he claimed.

“There was a lot of eating out, a lot of Airbnbs — very nice Airbnbs,” rented for guests and staff who were between homes, Walker claimed of the excesses on which he watched pastors spend money.

While planning an event at one such Airbnb, he learned that it cost $1,100 a night, which he felt was an extreme amount of money that would’ve been better saved so the branch could buy its own building. Instead, Hillsong Dallas continued using various local venues and purchased “an expensive apartment in downtown,” as a place to to film church videos. The clip of Reed giving his resignation speech was filmed in the unit, Walker said.

Walker recalled one day out on the town with Jess Bogard and two of his friends when she bought the group matching, $100 jackets before taking them out to dinner at a “pretty nice, pretty expensive Italian restaurant,” called North Italia, where she dropped hundreds on a decadent, wine-filled meal. “I think the bill was $600 to $700,” Walker recalled. “It was just, like, ‘Wow. [She] just dropped over $1,000 for no reason.’ ”

Through a “hookup [meant] for celebrities — someone who works in the office,” Walker said, many of the pastors secured pricey annual memberships to a private NYC club. The club vehemently denied any such hookup to The Post but would not comment on whether it counted Hillsong pastors among its members.

When money was used on volunteers, it was done manipulatively. “I was paid once, for one job” Walker said of his years at Hillsong. Reed gave him some $600 “as a favor,” when Walker was hard for cash. “That’s a tactic a lot of these pastors use to keep their secrets,” he claimed. “Buying us expensive gifts, giving us money, like, ‘I got your back, so when I need you to have my back, this is something to remember.’ “

After sticking it out through much of the pandemic, Walker finally left Hillsong this fall, repelled by the disrespectful behavior he’d witnessed.