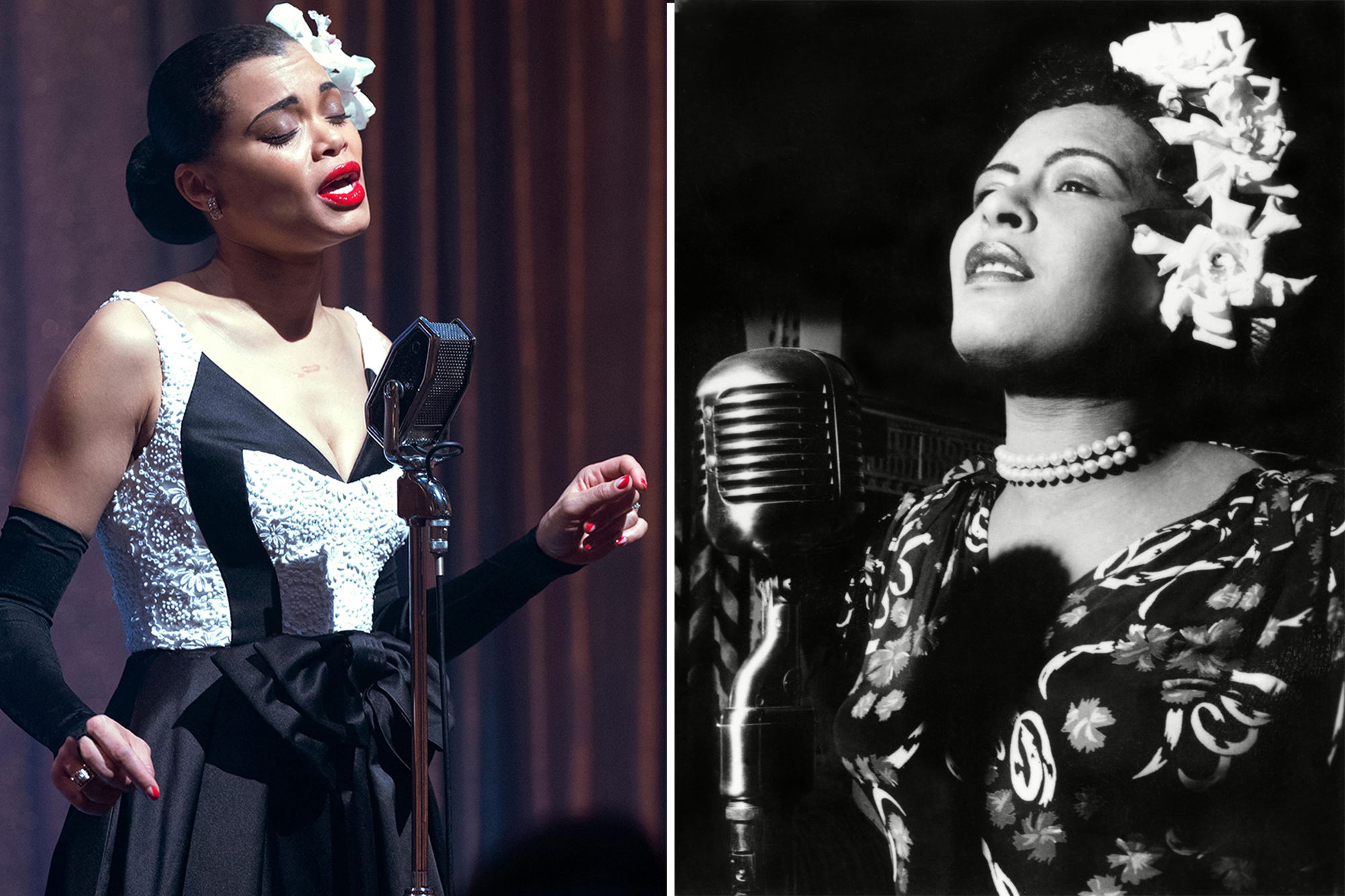 Billie Holiday sang “All of Me” — and it took all of Andra Day to play the legendary jazz chanteuse. From her Lady Day-inspired stage name to her jazzy delivery and retro style, Day has spent years paying homage to Holiday. Now, the “Rise Up” singer is carrying her idol’s torch in a different way, portraying her in the new film “The United States vs. Billie Holiday,” premiering Feb. 26 on Hulu.

Still, she was “terrified” making her acting debut as the lady who sang the blues.

“When I embarked on it, I was like, ‘This is such a bad idea! I’m not an actress.’ And I didn’t wanna ruin Billie’s legacy,” Day, born Cassandra Batie, told The Post.  “But now I can look back and say, ‘You know what? Maybe this was supposed to be.’ ”

Indeed, Day, 36, has already won critical acclaim for her performance in the upcoming Lee Daniels-directed drama. She’s up for best actress in the dramatic film category at the Golden Globes on Feb. 28 and is also generating Oscar buzz.

But transforming herself into the “Strange Fruit” songstress was no holiday for Day.

“There’s still a lot that I am working out in me from playing Billie,” said Day, who is also nominated for best original song at the Globes for her soundtrack tune “Tigress & Tweed.” “She gets in, you know what I mean? She gets ahold.”

Whether it was battling a heroin addiction or being targeted by the Federal Bureau of Narcotics, Holiday’s life was a struggle that required Day to go to some dark and difficult places. “It was a commitment,” she said. “I think it’s one I’m recovering from still.”

Such was Day’s commitment that she took up smoking to play her cigarette-puffing character. “I’d never smoked cigarettes before,” she said. “Just starting out smoking, I was practicing with my acting coach … I was like, ‘I want some of your American Spirits. That first day I was drinking vodka and smoking cigarettes, and I went home and threw up, like, five times!”

Day was able to kick the habit — eventually. “I was able to quit ultimately once we finished the last pickup shots last year,” she said. “But what I expected to be a four-, five- or six-month habit ended up turning into about a year and a half.”

Billie Holiday in 1947 with her boxer, Mister.Glasshouse Images/Shutterstock

She also poured down the booze to play Holiday, who died at 44 in 1959 of complications from cirrhosis caused by alcohol abuse. “I drank a lot of gin, I drank bourbon,” said Day. “I hadn’t drank in so long, and it was never really a big part of my life, even when I did when I was younger.”

While upping her alcohol and nicotine intake, Day also lost 39 pounds to prepare for the role from the time she landed the part in early 2018 until shooting began in fall 2019. “I was losing it healthily throughout that [period], and then once it got closer to shooting, that’s when I let everyone know, ‘OK, I’m gonna just kinda starve myself at this point!’ ” she said.

After that pound purge, Day said, “I’ve actually just recently started to gain back a little bit of weight. I’m up to, like, 140, which is good, ’cause I was 124 on set.”

Other aspects of her Billie-inspired makeover came more naturally to Day.

When she released her Grammy-nominated debut album, “Cheers to the Fall,” in 2015, you could hear echoes of Holiday in her sound and see them in her style — complete with flowers in her hair as a nod to the jazzwoman’s signature gardenia.

“She was really innovative fashionwise. And it was a part of her activism,” said Day. “She just was like, ‘Why can’t I wear fur coats or diamond earrings or fancy shoes like a white Hollywood starlet does?’ That was very much a part of her living her life as a free, liberated black queer woman.”

The movie alludes to a romance between Holiday and actress Tallulah Bankhead (Natasha Lyonne). “I think her and Tallulah really loved each other,” said Day. “I do think that Billie was able to be herself and more vulnerable with women in a way that she wasn’t really able to do with men. And I’m so glad they put that in there … We’re often writing queer stories, trans stories, out of our history, and we can’t do that.”

Indeed, Holiday’s bisexuality was not explored at all in the 1972 biopic “Lady Sings the Blues.” As for any comparison to the star of that classic — Diana Ross, who earned a Best Actress Oscar nomination — Day definitely isn’t trying to compete with the Motown diva.

“You might see comments that no one can top Diana and all those things,” she said, “and in my mind, I’m gonna agree! Of course I can’t.”