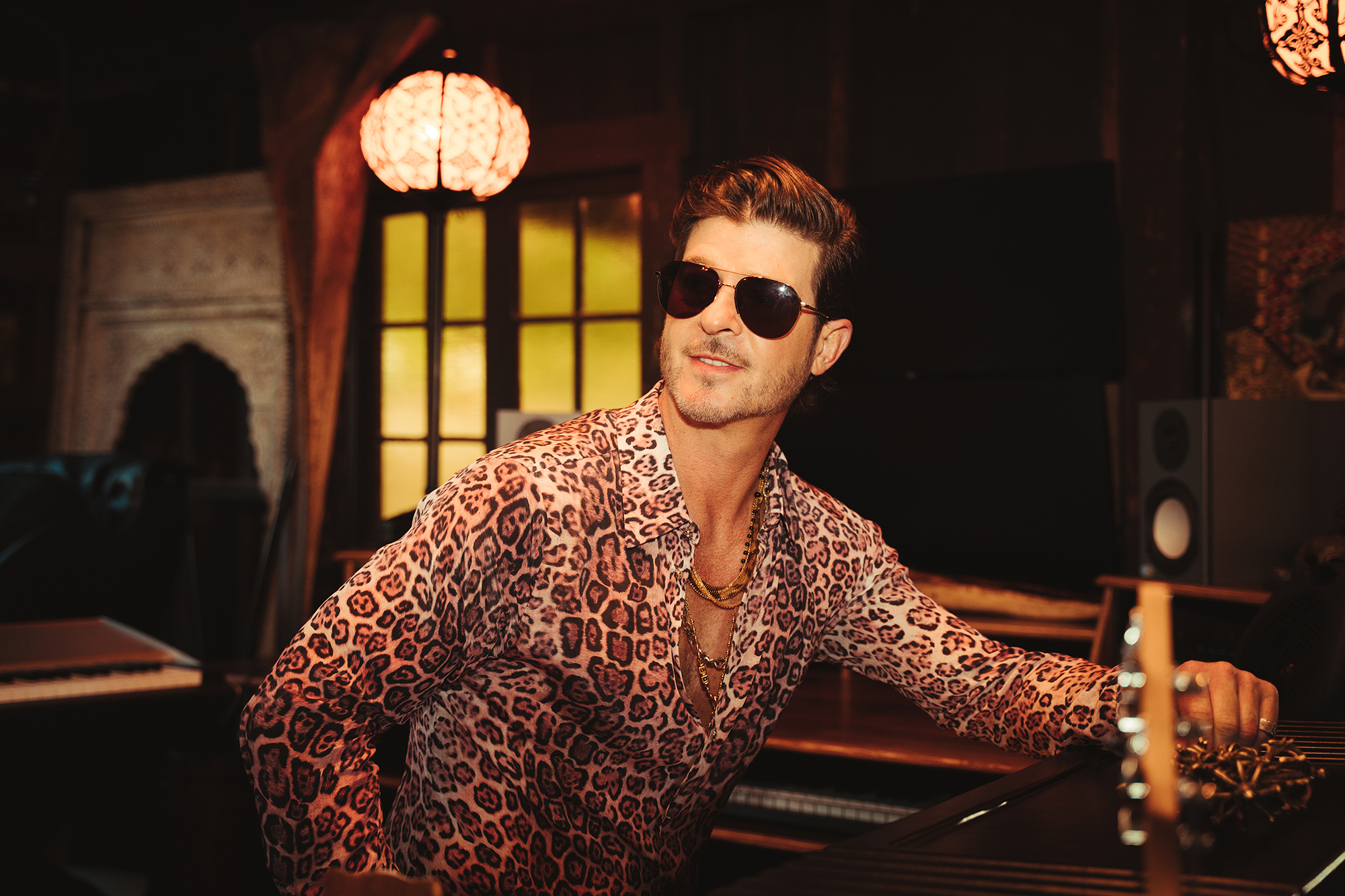 Robin Thicke once sang about being “Lost Without U.”

But at the height of his career — riding the smash success of his controversial No. 1 hit “Blurred Lines” in 2013 — he was just lost.

“I had lost perspective on my personal life and my music and what was appropriate … and why I was doing it,” Thicke, 43, told The Post. “I’d lost the intention, you know what I mean? I needed to regain my perspective and my positive intention of what my music was for — and what my life was for.”

But Thicke has found his groove again with a hit TV show, “The Masked Singer,” and a comeback album, “On Earth, and in Heaven,” out Friday. His first LP since a high-profile divorce (from actress Paula Patton), a copyright lawsuit, the death of his famous father Alan Thicke and the loss of his home in a wildfire, it’s a throwback to the artist he was before he was famously “twerked upon” by Miley Cyrus at the 2013 MTV VMAs.

From the jazz-kissed opener “Lucky Star” to the doo-wopping closer “That’s What Love Can Do,” his falsetto-sweetened soul goes down smoother than ever.

“I wanted to put out something that was very healing and loving and helped people get through their hard times and see the light at the end of the tunnel,” he said.

Robin Thicke is releasing his comeback album, “On Earth, and in Heaven,” out Friday.Chris Pizzello/Invision/AP

Thicke faced his own “hard times” when he separated from Patton — who he began dating when they were both teenagers — in February 2014. Four months later, he very publicly tried to win her back by releasing “Paula,” an entire album dedicated to her.

Although Patton still ended up filing for divorce later that year, Thicke said, “It turns out that that [album] was a necessary part of my learning curve.”

The split happened while Thicke was in the midst of a lawsuit with Marvin Gaye’s family over copyright infringement on “Blurred Lines.” In a 2014 deposition for the case, which was ultimately ruled in favor of Gaye’s family, he admitted to drug and alcohol abuse during the promotion of the “Blurred Lines” album: “Every day I woke up, I would take a Vicodin to start the day and then I would fill up a water bottle with vodka and drink it before and during my interviews.”

“Blurred Lines” also faced controversy surrounding the song’s lyrics, which were criticized widely as “rapey,” and a racy video featuring a topless Emily Ratajkowski that some found to be degrading to women.

“We had no negative intentions when we made the record, when we made the video,” said Thicke. “But then it did open up a conversation that needed to be had. And it doesn’t matter what your intentions were when you wrote the song … the people were being negatively affected by it. And I think now, obviously, culture, society has moved into a completely different place. You won’t see me making any videos like that ever again!”

But it was the sudden death of his father, “Growing Pains” star Alan Thicke, in December 2016 that really made the singer want to “spend my time wiser,” he said.

“Now that my father had passed away, I was no longer a boy — I had to be the man of the family,” said Thicke, noting that “That’s What Love Can Do” is “about the passing on of my father’s love and guidance to me, and me passing that along to my son [Julian].”

Thicke would experience more devastating loss in 2018, when his home in Malibu, California, was destroyed by a wildfire. Then last May, his mentor, groundbreaking Uptown Records founder Andre Harrell, also passed away suddenly.

Robin Thicke seen in 2018 with Julian, his son with Patton, and fiancée, model April Love Geary, who is holding the couple’s first child, Mia. Broadimage/REX/Shutterstock

And now, after their nasty custody battle, Thicke and Patton are in a much better place co-parenting Julian, 10. “It’s the best it’s ever been,” he said. “Even though we had our disagreements, we’ve been able to put our selfish needs aside for the betterment of our child, and he’s thriving.”

Thicke has also found love again with his fiancée, model April Love Geary, with whom he has three more children: daughters Mia, nearly 3, and Lola, 23 months, who inspired “Lola Mia” on his new album; and son Luca, who was just born in December. “We were gonna wait a handful of years for the third one, and then once we realized that I was gonna be home for a year, [we thought] this might be the best time to have our third kid,” said Thicke.

“We had no idea what we were doing,” he added with a laugh. “[After losing] my father and Andre, I’m probably overcompensating in filling the house with as many children as possible. But nothing else has ever brought me more joy.”