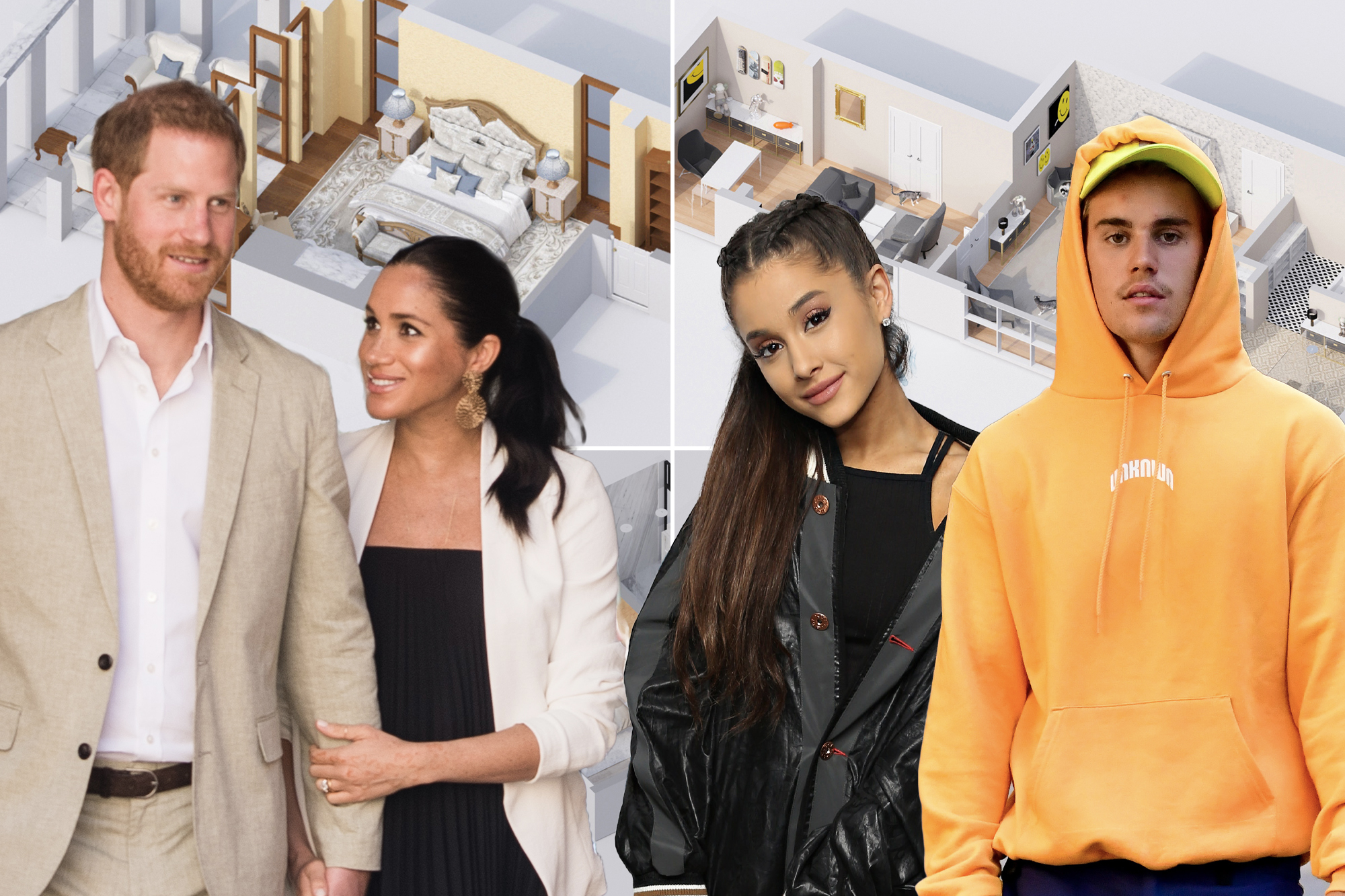 So this is where the magic happens.

Architects and designers teamed up to re-create three-dimensional floor plans of your favorite celebrities’ bedrooms.

From Harry and Meghan’s stately bedroom suite in Montecito, California, to Ariana Grande’s modern full-floor sprawling bedroom in Los Angeles, this is where A-list stars lay their heads — and more — at night.

Many luxury bedrooms are actually suites resembling what many of us would consider a full-fledged apartment — including sitting rooms, huge bathrooms, walk-in closets and balconies.

Scroll through to imagine how the other half lives — and lays.

The bedroom has a fireplace, a television, a chandelier and exposed wood beams on the ceiling. Home Advisor and Neo Nam studios

Former royals Prince Harry, 36, and Meghan Markle, 39, live in a modern home in Montecito, California, which they purchased for $14.65 million this summer.

Their cream-colored bedroom suite is on the second floor of the “Chateau of Riven Rock” and appears to span about 2,000 square feet, according to floor plans acquired by Home Advisor. The bedroom has a fireplace, a television, a chandelier and exposed wood beams on the ceiling.

Through French doors on one end of the bedroom is a large balcony depicted with a table and chairs overlooking a five-acre estate with an outdoor pizza oven, pool, playground, vegetable garden and tennis court, according to Homes of the Rich.

On the other side is an extravagant owner’s bathroom, which includes a fireplace, another chandelier, a marble bathtub and a large vanity, plus another sitting room, according to photos acquired by Home Advisor.

The nine-bedroom, 16-bathroom estate in Santa Barbara has a main house, a two-bedroom guest house, a tea house and a children’s house. The main house has a foyer with a staircase, an elevator, living and dining rooms, a gourmet kitchen with butler’s pantry, breakfast room, family room, library, billiards room with wet bar, home theater, gym, wine cellar, and a spa with massage room, according to Homes of the Rich.

They live in the 18,000-square-foot home near Markle’s mother with their 1-year-old son, Archie Harrison Mountbatten-Windsor. They had previously been staying in a mansion owned by “Madea” character actor and movie mogul Tyler Perry.

The bathroom is a suite in itself, with a dual vanity, two toilets, a large walk-in shower and a stand-alone tub under a crystal chandelier.Home Advisor and Neo Nam studios

Justin Bieber, 26, and his wife, model and actress Hailey Baldwin, 24, live in this $25.8 million Beverly Hills mansion with seven bedrooms and 10 bathrooms.

The main bedroom has large French doors that open onto a balcony and a wrought-iron chandelier in the middle of the wood-floored room, according to the listing.

To one side of the bedroom is an open sitting room and office with a chandelier, floor-to-ceiling windows and a balcony with views of Franklin Canyon.

The main bedroom has large French doors that open onto a balcony. And in the middle of the wood-floored room is what appears to be a wrought-iron chandelier.Realtor.com

The bathroom is a suite in itself, with a dual vanity, two toilets, a large walk-in shower and a stand-alone tub under a crystal chandelier.

The $25.8 million house on 2.5 acres has 11,000 square feet, a movie theater, a home gym, a wine closet and an outdoor pizza oven, a koi pond, an infinity pool and a tennis court, according to the listing.

The “Intentions” singer lives there with Baldwin, their cat Sushi and their dog Oscar. There are no plans to add a third member to the family, according to the couple, who recently clarified that Baldwin is not pregnant.

Bieber formerly owned a Calabasas mansion, which he sold to Khloé Kardashian for $7.2 million in 2016, Page Six previously reported.

Grande, 27, lives in a $13.7 million mansion in Los Angeles, where her bedroom spans the entire top floor of the home.Home Advisor and Neo Nam studios

Ariana Grande bought this crib just for the closet — a massive backlit walk-in that is larger than most apartments.

Grande, 27, lives in a $13.7 million mansion in Los Angeles, where her bedroom spans the entire top floor of the home. The Home Advisor rendering of her boudoir doesn’t include the closet because it was so big, designers had to leave it out of their reconstruction.

The rest of the bedroom includes a lounge area and a sleeping area with floor-to-ceiling windows that open up to an outdoor terrace with views of Los Angeles and Benedict Canyon, according to the listing.

The marble bathroom is huge, with stand-alone tub on a pedestal and a floor-to-ceiling window with city views. It has a walk-in rainfall shower and a large vanity.

The 10,000-square-foot modern house has four bedrooms, six bathrooms, a cedar sauna and steam room, a massive L-shaped infinity pool with a spa, a full gym, a home theater, a 300-bottle wine room and a bar, according to a Famous Entertainment video tour.

Grande lives here with fiancé Dalton Gomez, a 25-year-old Compass real estate broker, along with Grande’s 10 dogs. Grande, who is also the founder of an animal rescue, owns homes in Montecito, California, and New York.

Lawrence’s bedroom has a sitting room and a bathroom. The open bedroom and sitting room have dark hardwood floors, chandeliers, detailed crown molding and huge French windows that open onto a balcony.Home Advisor and Neo Nam studios

Jennifer Lawrence, 30, lives in an elegant $8 million mansion that was once home to Jessica Simpson, and before that, Ellen DeGeneres, according to Variety.

Lawrence’s bedroom has a sitting room and a bathroom. The open bedroom and sitting room have dark hardwood floors, chandeliers, detailed crown molding and French windows that open onto a balcony. She also has a walk-in closet with nine large rows for shoes, and a sitting area, according to photos acquired by Home Advisor.

The bathroom with marble countertops and white farmhouse cabinetry has a stand-alone tub, dual sinks, a large vanity and a walk-in shower, photos show.

The 5,500-square-foot Beverly Hills house has old-money charm, with cream walls, Roman columns and elegant decor. The exterior of the house is covered in ivy and the yard has a koi pond with a fountain, plus a swimming pool, according to the listing.

She recently bought a new house in the West Village with husband Cooke Maroney, a 36-year-old art curator, but the couple has spent time at her Los Angeles house. Lawrence is currently in Massachusetts filming her new Netflix movie “Don’t Look Up” — and recently had a scare with an on-set eye injury but is expected to fully recover.

The art lover’s bedroom is the most unique of the bunch, with winding nooks and crannies that give the impression of a gallery.Home Advisor and Neo Nam studios

Rapper Travis Scott, 28, bought his Los Angeles mansion for $23.5 million in June 2020, according to Zillow.

The art lover’s bedroom is the most unique of the bunch, with winding nooks and crannies that give it a gallery feel.

The rapper’s bedroom has a sitting area and a lounge. The attached bathroom has a stand-alone bathtub and modern dual sinks and a walk-in shower. It also has a walk-in closet that looks like a high-end jewelry store, with hanger space behind glass and glass-top dresser islands. The room has a circular chandelier topped with gem-like spikes, according to pictures acquired by Home Advisor.

Scott got this mega-mansion at a steep discount — the original asking price was $42.5 million. The 16,700-square-foot abode has seven bedrooms, eight-and-a-half bathrooms, three wet bars a home theater, a gym, a wine cellar and a 20-car showroom.

It has views of Los Angeles and the Pacific ocean, according to the listing. Outdoors, there are terraces, a spa and a huge infinity pool. It is optimized for healthy air, water, nourishment, light, fitness and comfort, according to Homes of the Rich.

Scott has a 3-year-old daughter with ex-girlfriend Kylie Jenner, 23, with whom he shares custody of their child. Previously, he lived at a $13.5 million Benedict Canyon mansion, which he appears to still co-own with Jenner, according to Variety.

Her bedroom is neutral and warm, with brown walls, tan carpets and wood features. She has two bean bags at the foot of her bed, which sits on a raised pedestal and is slightly inset into the wall.Home Advisor and Neo Nam studios

Jennifer Aniston, 51, lives in the $21 million Bel Air mansion where she married her ex-husband Justin Theroux, 49, in 2015.

Her bedroom is neutral and warm, with brown walls, tan carpets and wood features. She has two bean bags at the foot of her bed for her dogs, and her bed sits on a raised pedestal that is slightly inset into the wall. Attached is a separate office with bookshelves and a desk, according to Architectural Digest.

Aniston bought the 8,500-square-foot house in 2011. It has Asian-inspired pocket gardens, terraces, city and ocean views and an outdoor pool. Her home is designed with warm wood, stone and bronze, according to Architectural Digest.

Aniston lives in the manse with her three dogs, Clyde, Sophie and Lord Chesterfield. She split from Theroux in 2017 and has since started dating “Blades of Glory” director Will Speck, but there is no evidence the pair lives together at the house.

The 28-year-old’s bedroom has a barn ceiling and a rounded end with tall French windows. On a slightly raised level is a sitting room.Home Advisor and Neo Nam studios

Selena Gomez’s home in Los Angeles has two owner’s suites with a hacienda and farmhouse style with a gray, recycled-wood aesthetic against the clean white walls, according to listing photos.

The 28-year-old’s bedroom has a barn ceiling and a rounded end with tall French windows. A sitting area is on a slightly raised level in the main bedroom.

The attached bathroom has a stand-alone tub in a rounded enclave with large windows, two toilets, a walk-in shower and two sinks. An exterior door opens onto a balcony, the listing shows.

Gomez was most recently rumored to be dating Miami Heat’s Jimmy Butler, but there is no evidence the pair lives together.Realtor.com

She bought the $4.9 million property with 11,000 square feet, six bedrooms and 10 bathrooms from Tom Petty last year. It has an in-home recording studio, gym, massage room, wine cellar and pool as well as canyon views, according to Realtor.com.

Gomez was most recently rumored to be dating Miami Heat’s Jimmy Butler, but there is no evidence the pair lives together. She has two dogs, Daisy and Winnie, which often appear on her Instagram Stories. Gomez has a cottage in Studio City, California, and she previously owned properties in Calabasas and Fort Worth, Texas.