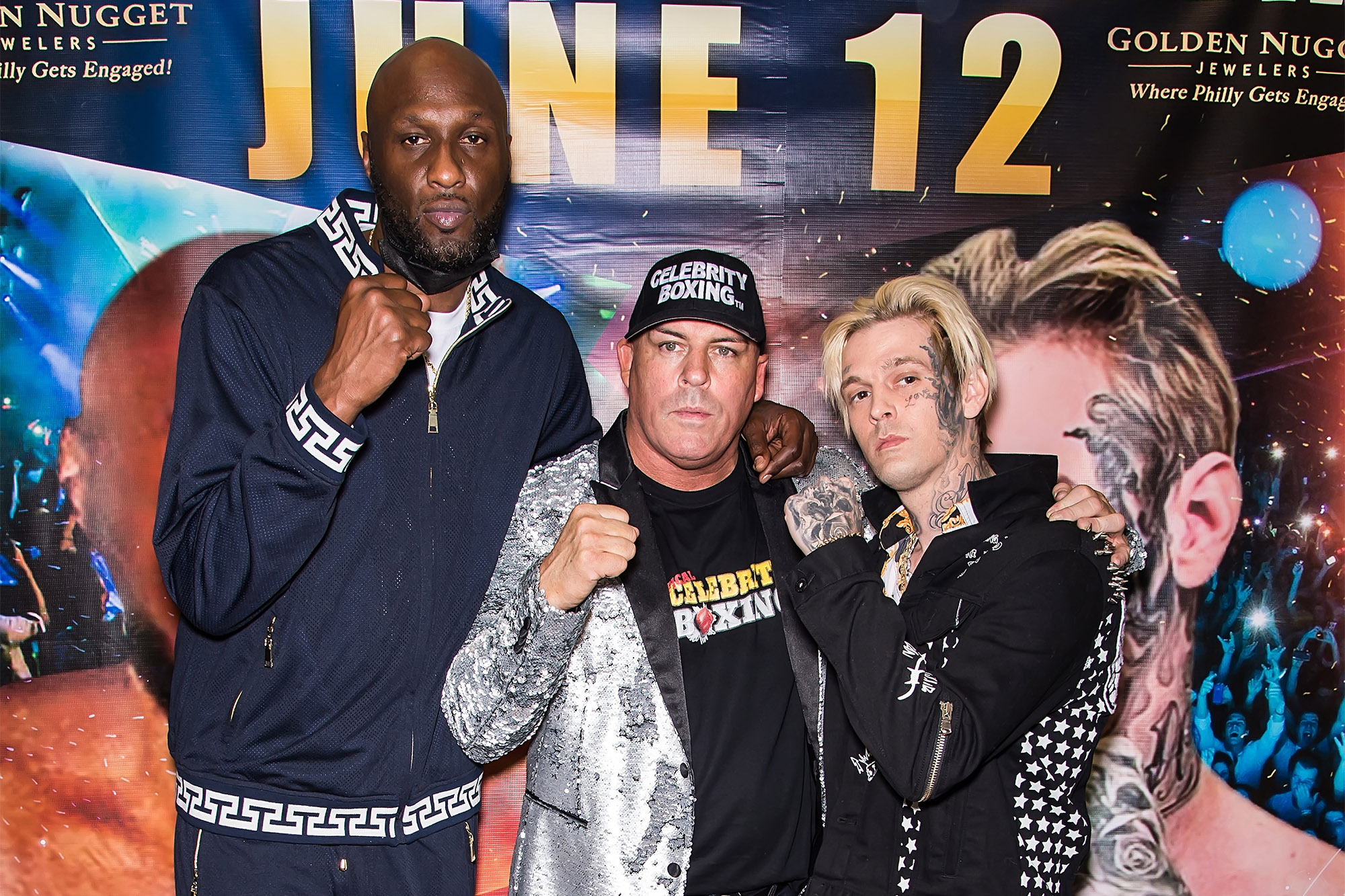 He nearly died from a drug overdose and was married to a Kardashian. Clearly, Lamar Odom is used to punishment.

But around 11:30 p.m. EST on Friday, the former basketball player is going to brave a more immediate potential beating when he steps into the ring against former teen idol Aaron Carter.

Welcome to the world of celebrity boxing — a sports sideshow that runs the riskof wearing out the F-O-R-M-E-R keys on a journalist’s keyboard — but one thathas become increasingly popular. Not to mention lucrative: The Odom-Carter bout will livestream for $29.99 on FITE.TV.

“I’m building the WWE of boxing,” Damon Feldman, the fight’s promoter and founder of Celebrity Boxing, told The Post. “Boxing is in a weird spot. There are no fighters to follow right now. Celebrities are looking at this as a way to get back in the spotlight and a way to get money.”

So far, so good. Tickets to witness the live Odom-Carter fight, which is being held at the Showboat hotel in Atlantic City, New Jersey, are sold out, eagerly snatched up by fans who are no doubt hoping Carter gets the tattoo smacked off the side of his face. And though Feldman wouldn’t reveal just how much the stars stand to make this time around, celeb fighters are are often paid an appearance fee plus a portion of proceeds. The real money is likely to come from pay-per-view, where home audiences will pony up nearly $30 to drink a few beers and scream “Hit him!” at their TV screens.

Odom, 41, a former Los Angeles Laker, and Carter, 33, a former “Dancing With the Stars” contestant and current OnlyFans poster, are new to boxing, but both have been posting sweaty training videos and promise fireworks. “I grew up street fighting, and I’m really looking forward to this match,” Carter, who’s from — checks notes — Tampa, Florida, said in an online video. “But my dad always said, ‘The bigger they are, the harder they fall.’ So, Lamar, I’ll see you there, bro.”

This fight comes on the heels of last weekend’s exhibition between former pro boxer Floyd Mayweather, 44, and Logan Paul, an obnoxious 26-year-old internet personality with a huge fanbase — more than 20 million followers on Instagram and 23 million on YouTube — but limited recognition amongst those who were alive during the Reagan administration.

In 1994, former child star Danny Bonaduce kicked off the “Celebrity Boxing” craze when he fought another child star from his era, Donny Osmond. ASSOCIATED PRESS

The live crowd booed the bout at times, and Paul landed just 12.9% of his shots, according to CompuBox. Nonetheless, some 2.5 million viewers paid to watch it. Paul told TMZ that he stood to make about $20 million for the fight, a nice salary bump from the estimated $12.5 million per year he makes YouTube-ing.

Celebrity boxing had its first moment back in the late 1990s and early 2000s. Former child actor/current adult spectacle Danny Bonaduce fought former child star Donny Osmond in 1994, and it was an undisciplined, amateurish swingfest billed as “The Vanilla Thrilla!” A 2002 battle featuring comedian Ricky Gervais pulled in 5.5 million viewers, and in the same year, Fox launched the reality series “Celebrity Boxing.” It was knocked out after two episodes.

Feldman founded his company in 2003, and has staged tussles featuring Tonya Harding, Jose Canseco, and Nadya “Octomom” Suleman. “If you had 15 minutes of fame, I’ll give you the 16th,” he said. (He might also help you get a concussion.)

Now the genre is enjoying a bit of a resurgence, driven, in part, by Paul andhis younger brother Jake, also an inexplicably popular online media personality-turned-fighter. Not everyone is in their corner.

“Most of the boxers feel it belittles the sport,” Gleason’s Gym presidentBruce Silverglade told The Post. “I have a lot of boxers at the gym who workand sweat and don’t get [anywhere near] the recognition or the money . . . I  don’t think pure boxing people look at this for anything other than the comedic end of it.”

Feldman has taken heat for years, including from the justice system. He pleaded no contest in 2011 to fixing contests and promoting bouts without a license in the Philadelphia area. In 2016, he pled guilty to simple assault of his then-girlfriend and served 14 months in prison, according to Metro Philly.

“All I do is get criticized,” Feldman said. “The haters are part of the game.”

The promoter called his events “sports entertainment,” saying they are akin to seemingly staged pro wrestling bouts. That hasn’t stopped some bookies from taking bets on the Odom-Carter showdown, where the former basketball player is a heavy -280 favorite, meaning you’d have to wager $280 to win $100 with an Odom victory.

Look at it this way: As long as either of them gets punched, we all win.

Buffalo, NY battered by chicken wing shortage
Kandi Burruss Is A Busy Woman And An Inspiration To Her Fans
Comment