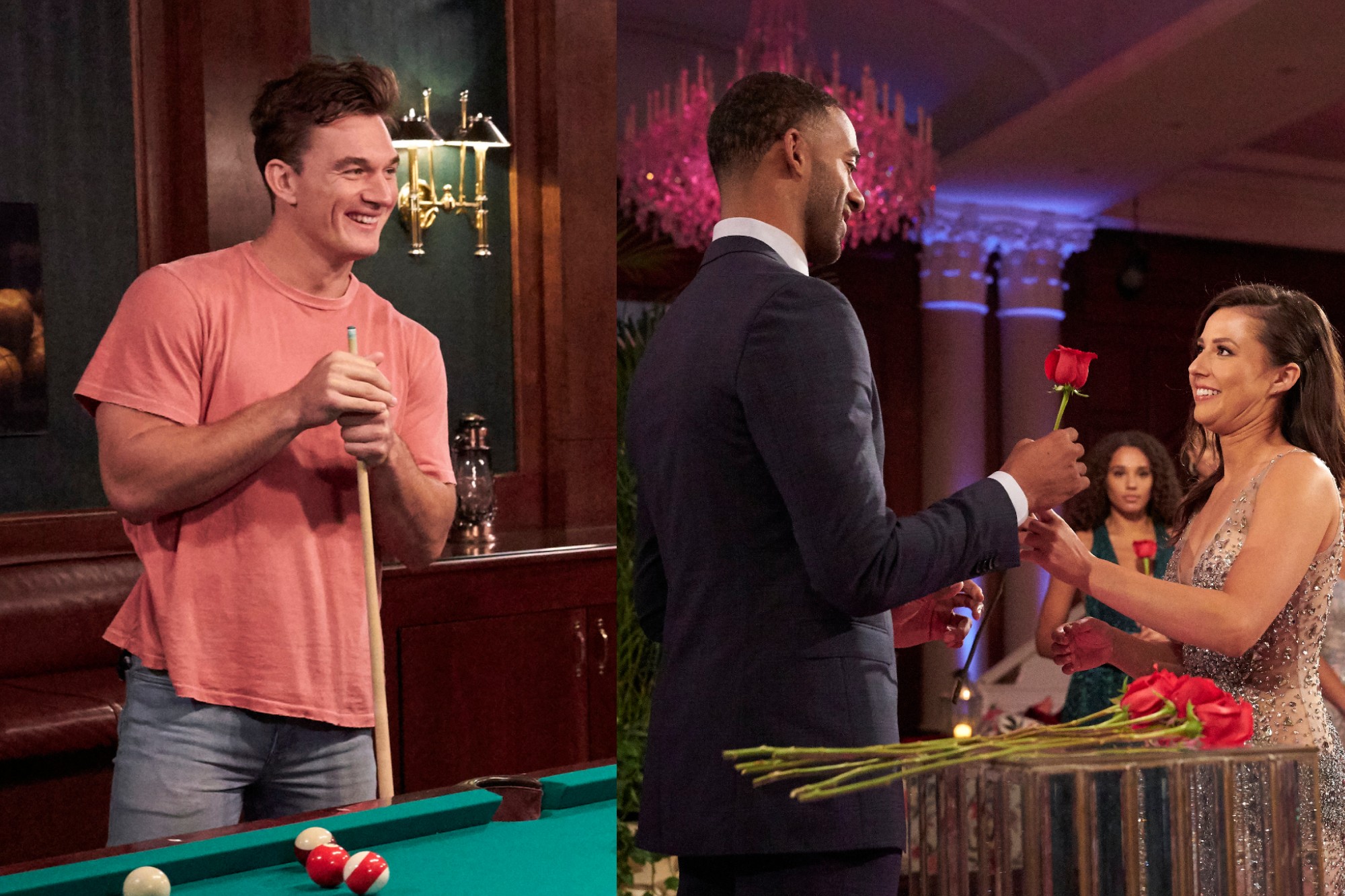 Looks like Matt is going to have to be his own judge of character from now on.

Maybe it’s because it’s his first foray into reality TV, but Matt hasn’t picked up on any of the red flags from the cast on his own. Katie has been alerting him and helping him clean house.

Although he didn’t feel a romantic spark with her, he’s going to have to start reading between the lines from here on out. Can he do it? I’m not so sure.

This is what went down on Episode 6.

Picking up where we left off last week, Jessenia and MJ were waiting before the cocktail party to speak to Matt. Jessenia was angry that MJ lied about her involvement with the bullying culture in the house; MJ was deflecting, crying fake news. Both gals spoke with Matt to tell their truth. He chose Jessenia’s, MJ was walked out. Jessenia received a rose.

This was apparently too much for Matt to handle: When the other women arrived he canceled the party and went straight into the rose ceremony. This didn’t sit right with Serena C., who was mad she didn’t get time with Matt. She took it out on Katie for bringing up the bullying issues with the Bachelor weeks ago— surely if most of the women were still being treated poorly by a few mean girls, she would have gotten more time with Matt. Sound logic.

Poor Brittany — who endured horrific bullying and got stamped with a rumor that could follow her for the rest of her life — was sent home. Magi and Ryan were sent packing as well.

Uh-oh. Never-been-kissed Heather from Colton’s season decided to show up at the resort. Her good friend Hannah Brown — who is also a good friend of Matt’s — told her she and the Bachelor would be a great couple. So she came to Pennsylvania to meet him before he is off the market. Chris Harrison pretended to be surprised she was there, and said he had to ask production if she could enter their quarantine Bachelor bubble. She was allowed to quarantine

… went to Pieper. Matt surprised her with a nighttime carnival just for the two of them. It was beautiful and extravagant; I can only imagine what production spent.

Over dinner, Pieper confided in Matt about how she was raised to hold her feelings in. All she’s wanted is for someone to vocalize their love for her — and Matt wants to be that guy. “Matt, I am falling in love with you, and that’s the scariest thing,” she told him, which I thought came kind of out of the blue. Our leading man clearly didn’t think so, because he gave her a rose.

In classic “Bachelor” fashion, a random country band serenaded them while they danced and made out.

Abigail, Bri, Chelsea, Kit, Jessenia, Michelle, Rachael, Serena C. and Serena P. rolled into a bowling-themed date. As always, the winners would get an after-party with Matt, the losers would not.

The pink team — Jessenia, Michelle, Chelsea and Serena P. — won and got a cozy catchup with their man, or so they thought. Matt felt bad and brought the losers back. Serena P. told Matt she’s falling for him. Chelsea nailed a kiss on him. But it was Michelle who got the rose.

Finally. Breakout “Bachelorette” star and best friend of Matt James, Tyler Cameron, came to join his buddy in Pennsylvania and give him sage bro advice. “Stay open,” Tyler told his roommate and bikini waxing partner. His relationship with Hannah Brown started later in the season, and he doesn’t want Matt to close himself off to early front-runners.

The real love story of this season. ABC

Katie thought she was getting a romantic spa day with her man. But instead, Katie and Matt’s date was an excuse for Matt to prank Tyler. He hired an actor to play Tyler’s masseuse and take their commands through an earpiece. “We’re going to ruin his day,” Matt told his date.

They had her massage his nipples and hurt his back. At one point, Matt stepped in as the masseuse while Katie tried not to laugh too loudly. They all had a great time.

At night, they tried to turn up the romantic side of their relationship — without Tyler there to torture. Katie opened up to Matt about her past relationships and why they haven’t worked, and why it was so important for her to be herself in a relationship.

Matt needed to be honest with Katie. Though she’s been such a crucial aspect of his journey, he has stronger relationships with other women in the house. “I just haven’t had those feelings that I need to have,” he told her. She was blindsided.

Heather’s quarantine was over, and she debuted herself in the most aggressive way possible: by crashing the cocktail party (in a gown and a minivan, an iconic combination).

Not saying hello to any of the women she was pissing off, Heather walked right up to Matt while he was talking to Pieper. While they talked in private, every gal sitting on the couches gave the camera the Jim Halpert face.

I doubt that Heather gets to stay much into next week. She was a fun distraction, but she’ll be gone soon.

And don’t cry too much for Katie. If the rumor mill is true, she’ll be getting another chance at love very soon.

Kandi Burruss Has The Best Idea For This Valentine’s Day – Check Out Her Message
KUWTK: Kim Kardashian Fiercely Defends Daughter North West After Critics Doubt Stunning Painting Was Done By The 7-Year-Old!
Comment