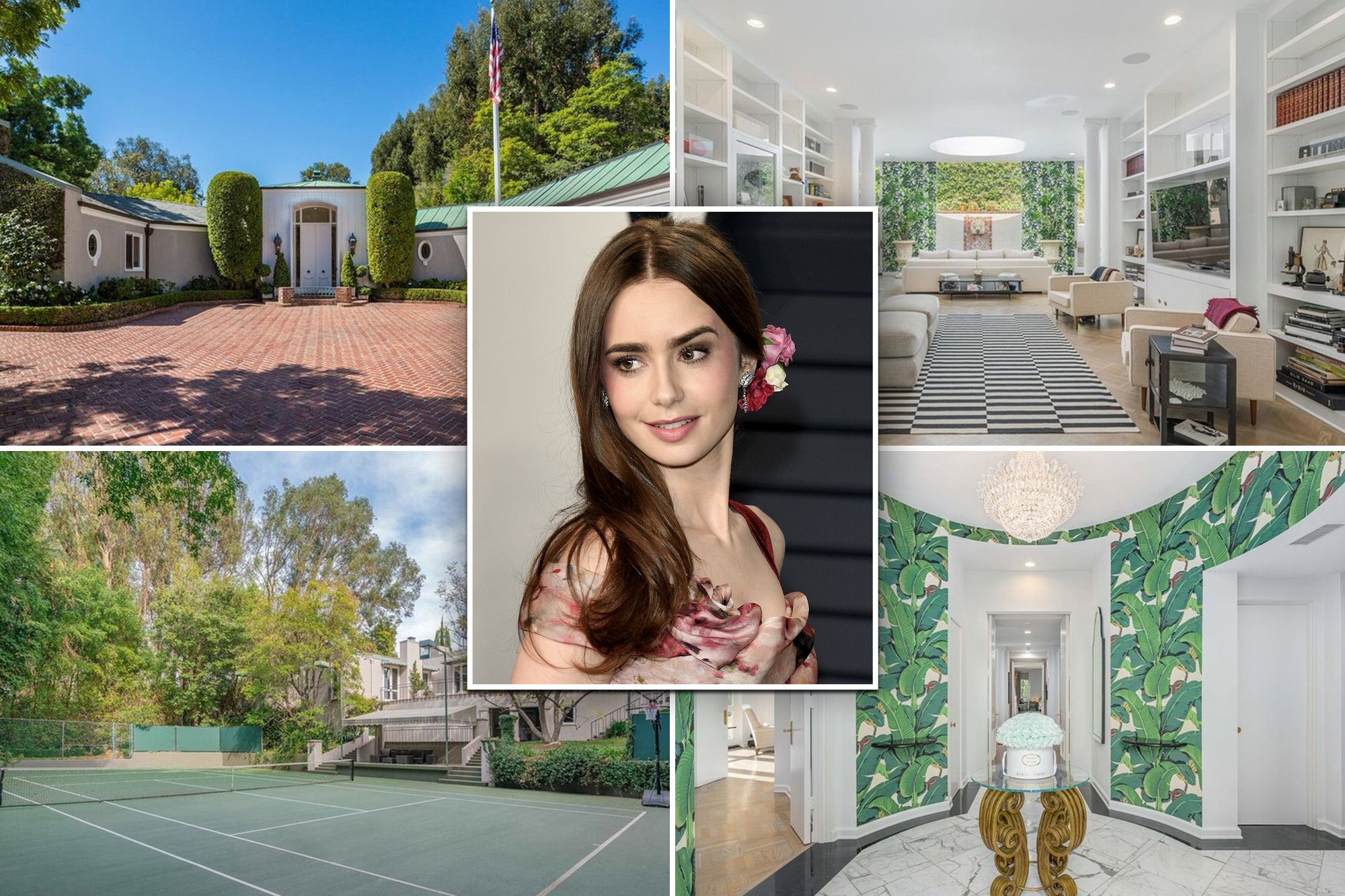 Lily Collins must be plotting a gorgeous new home with her fiancé Charlie McDowell if she’s willing to give up this sprawling Beverly Hills estate.

The sale closed yesterday, according to Realtor.com. Details on the $13.5 million listing are scarce, but The Post got an exclusive look at what’s inside this glamorous Hollywood Regency mansion, from its lit, sunken tennis court to its patinated copper roofs, based on a Beverly Hills city landmark assessment and evaluation report.

The “Emily in Paris” star purchased the four-bedroom, five-bathroom property for $12.5 million in 2016. The smooth stucco compound is guarded by a red brick privacy wall and iron gates.

Removed from the street by a brick driveway, the 5,000-square-foot house sits north of Sunset Boulevard, away from prying eyes. The immaculately scaped courtyard has a herringbone brick motor court surrounded by stucco walls on three sides and topped with timeless copper roofing.

A circular foyer opens into a living room with a gold-gilded ceiling-height fireplace, a library and a bar/lounge with a huge round skylight, according to the Coldwell Banker listing. Outside the lounge, a stone lion’s head peers out of a brick frame in a garden wall, spitting into a pool filled with small stones.

The home also has a formal dining room, a kitchen and a breakfast room, which was added in 1985.

A circular foyer opens into a living room with a gold-gilded, ceiling-height fireplace, a library and a bar/lounge with a huge round skylight.Realtor.com

The owner’s bedroom has a television closet, a wall safe, a walk-in closet, a large bathroom and a dressing area, according to the city landmark assessment.

The 0.7-acre estate has a stucco and brick-trimmed patio deck with a pool, a hot tub and a cabana with a dressing room. A sunken backyard has a lighted tennis court with audience seating for six. The tennis court and a greenhouse were added in 1985, replacing a grotto of banana trees.

The house was designed by architect John Elgin Woolf, father of the Hollywood Regency style and designer for Cary Grant, Bob Hope and John Wayne, according to the city landmark assessment.

Outside the lounge, a stone lion’s head peers out of a brick frame in a garden wall, spitting into a pool filled with small stones. Realtor.com

“Woolf’s penchant for elongated architectural details, such as French doors and double columns, helped to convey a brittle elegance that was completely twentieth century,” said the 2017 report by Jan Ostashay of Ostashay & Associates Consulting in Long Beach, Calif.

After the dentist and his wife Catherine died in the early 1980s, music publisher Gilbert Garfield purchased and renovated the home in 1985. Its most recent tenant was investor Roy Edgar “Ted” Naftzger, Jr., who appeared in Sports Illustrated in 1966 for winning a sailfishing tournament. He died in 2007, and his wife died in 2016 (all according to the landmark assessment) — and that’s when the “To the Bone” star snapped it up.

A sunken backyard has a lighted tennis court with audience seating for six. Realtor.com

Known for her roles in “Extremely Wicked” and “Mirror, Mirror,” the 31-year-old has spent quarantine with her now-fiancé Charlie McDowell. The pair got engaged in September when McDowell gave her a unique engagement ring. McDowell, age 37, is known for directing the film “The One I Love” and several episodes of “Dear White People.”

Collins is now making the rounds on awards for her performance in Darren Star’s Netflix original series “Emily in Paris,” where she co-stars with French actor Lucas Bravo, “the hot chef.” She is planning on returning for a second season, she told Deadline.

The model and actress is the daughter of long-divorced Jill Tavelman and British musician Phil Collins, who recently sold a $40 million property in Miami. In 2017, she wrote her father an open letter forgiving him for not being present in her upbringing.

Listing agent Dustin Nicholas with Nicholas Property Group did not respond to a request for comment. The anonymous buyer was represented by Branden Williams of The Beverly Hills Estates Inc.