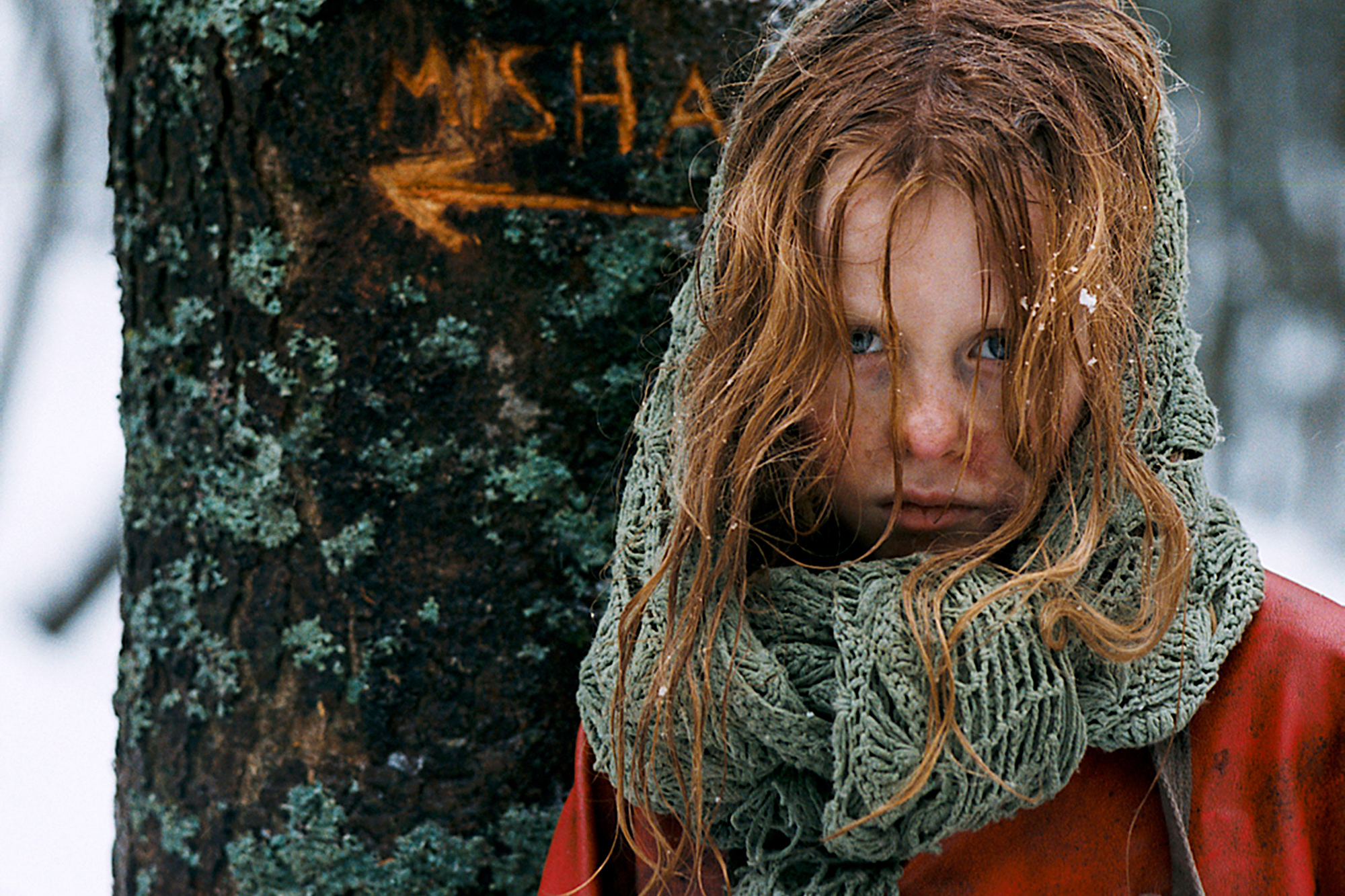 In 1997, a Massachusetts woman named Misha Defonseca published a harrowing memoir recalling her superhuman journey to survive the Holocaust. It was, to say the least, unbelievable.

After her Jewish parents were deported by the Nazis from Belgium to Germany, her story goes, the 7-year-old Defonseca hiked for years through the forest to find them. Most extraordinarily, the lonely kid met up with a pack of wolves that accepted her as one of their own.

Being so young when she left home, the then-60-year-old author claimed she had no memory of her real surname, and never discovered what became of her mother, Gerusha, and father, Robert.

The book, called “Misha: A Mémoire of the Holocaust Years,” was eventually translated into 20 languages and sold millions of copies. It inspired the 2007 French film “Survivre Avec les Loups” and attracted the attention of Disney and Oprah Winfrey. Defonseca had tears in her eyes on talk shows and gave inspiring speeches to stunned students across Europe.

Every word of her story was a lie.

A new film “Misha and the Wolves,” tells the story of Misha Defonseca, who became famous for her 1997 memoir in which she claims that she fled the Nazis as a child, hiked alone in the forest and befriended wolves.Alamy Stock Photo

A shocking new documentary called “Misha and the Wolves,” which premiered Sunday at the Sundance Film Festival and screens again on Tuesday, compellingly explains how Defonseca was revealed to be a fraudster after years of peddling her bunk history. (On Monday, it was reported that Netflix had acquired the global streaming rights to the film.) Director Sam Hobkinson’s film is a cautionary tale about how people’s willingness to believe a sympathetic fabulist, and even cash in on it, led to an offensive worldwide hoax.

“Not only was she not a Jewish child hiding in the forest from the Nazis, she was a Catholic child safely enrolled in school,” her duped publisher, Jane Daniel, says in the doc. “She wasn’t anywhere near wolves. She was playing to an audience. She knew exactly what she was doing.”

Defonseca first shared her impossible memories publicly in the early ’90s at a synagogue near her home in Millis, Mass. It was Yom HaShoah, Israel’s Holocaust Remembrance Day.

“Misha and the Wolves” was made into a movie (Defonseca is pictured at left with the actress who played her) before her true identity — she’s not even Jewish — was discovered.Sipa/Shutterstock

“I was, like, mesmerized,” says her neighbor Karen Schulman, who witnessed the speech. “People never knew about her being a Holocaust survivor. I had tears in my eyes. She was hungry. She was cold. She was lonely. She wanted her parents. How did this person survive?”

Defonseca claimed she was first taken in by a Catholic family as a “hidden child,” one of many Jewish children who were given new identities and families to evade capture by the Nazis. Her name was changed to Monique De Wael. But the old couple hated her, she said, so she left Brussels in search of her birth parents in Germany, bringing along only a knife, water and food. One day on her dangerous journey through the wilderness, the girl approached a wolf.

“The wolf seemed alone, and I needed a companion,” Defonseca recalls in archival interview footage. “Much later it was a whole pack of wolves … I don’t know how long I was with them. They accepted me and protected me.”

The story that was too good to be true found its way to the desk of Daniel, a small-time local publisher who wanted to make a splash.

“I was looking for a new project,” Daniel says in the film. “I was the first one who came around and said, ‘Could we make this even more public? Can we take this to another level? I could probably make something big out of this. There is a market for this story.’”

In her memoir, Misha Defonseca fraudulently claimed she was raised by wolves after escaping the Nazis as a child.

Defonseca agreed, and the “Misha” memoir was published by Daniel’s Mt. Ivy Press in April 1997.

Despite the wild, appealing story, sales were initially sluggish. In an attempt to juice them up, the publisher’s agent started floating the book around to Disney, who thought it would make a winning film, and Oprah Winfrey, in hopes it might be chosen for her popular book club. Interested, “The Oprah Winfrey Show” flew a producer out to film a segment of Defonseca interacting with wolves.

Wolf expert Jodi Soffron, who befriended Defonseca, supervised the shoot in Ipswitch, Mass., and trusted the woman to go into the wolf pen alone. The filming was going well when the wolf suddenly jumped up on Defonseca’s tiny shoulders and took her head in its mouth.

The terrified crew froze, and feared they were about to witness a death, but Defonseca calmly removed herself from the wolf’s clutches and resumed taping. The frightening confrontation confirmed what Daniel and Soffron hoped to be true.

“’There’s the connection between the human and the wolf!’” says Daniel. “I saw it. It was amazing. It was a shocking moment.”

But the “Oprah” appearance fell through. Defonseca mysteriously backed out and grew angry and distant from her publisher while no money came in. The author and her husband were struggling, borrowing tens of thousands of dollars from friends, so she took Daniel and her publishing company to court in 1998.

After the holes in her story were exposed, Defonseca defended herself — and the $22.5 million she made off a civil suit for her story’s royalties — in court in 2008 (pictured). But in 2014, a judge ruled that she’d committed fraud and had to give back the sum.ASSOCIATED PRESS

“Misha was asking for the return of copyright to her name and all of the royalties she was due for book sales,” her lawyer says in the doc. “There was so much anger and bitterness between the parties by the time I got involved, there was not much room for negotiation.”

The jury, like everybody else, was gripped by Defonseca’s life story, and ruled in her favor, awarding her $7.5 million in 2001, a staggering amount for a book that sold only 5,000 copies in the States. The film and TV opportunities that Daniel listed in her testimony convinced the judge Defonseca was owed much more — and tripled her settlement to $22.5 million.

Daniel was gobsmacked. Being portrayed as a monster who was trying to bilk a Holocaust survivor gave her post-traumatic stress disorder, she claims, and her business nearly folded. Desperate to turn her situation around after losing an appeal, she headed to her lawyer’s office and scoured documents from the trial for any new information. She came across an interesting one: Defonseca’s bank account.

There on the innocuous form, in Defonseca’s handwriting, were her mother’s maiden name (Donvil), her birth date and her place of birth (Etterbeek, near Brussels) — all information that the author claimed in her memoir she didn’t know. Could it all have been an elaborate fake?

“If I can prove she’s not who she’s been saying she is,” Daniel says in the doc, “I can overturn this judgement.”

Building a team, she enlisted the help of a genealogist, Sharon Sergeant, who quickly made some alarming discoveries. There was an odd discrepancy between the English and French editions of the memoir: her last name. (After the court verdict, Defonseca had sold the rights of her book to a publisher in France and millions of copies were printed.)

The English memoir says Misha’s last name was changed to De Wael, but the French edition, which was also on sale in her native Belgium, has it as Valle.

She dialed up a genealogist in Belgium, Evelyne Haendel, who herself is a Holocaust survivor. Haendel pored over local phone books from the 1930s and ’40s. There were no Valles to be found, but hundreds of De Waels. So she checked records of hidden children who were protected by Catholic families — no Mishas.

Defonseca claimed her parents had been deported together, but lo and behold, there were no mentions of a Robert and Gerusha as a pair on any Nazi list.

After uncovering her fraud, publisher Jane Daniel took Misha Defonseca to court in 2008 to overturn a civil suit which granted Defonseca and her co-writer a total of $32.4 million.

Haendel’s breakthrough came from a hunch. If she couldn’t find Misha in Jewish libraries, maybe she wasn’t Jewish at all. She headed to local Catholic churches and sorted through records of baptized babies. And there it was — Monique De Wael had been born and raised a Catholic, and even attended the local Catholic school. She was never named Misha, she was not Jewish, she hadn’t left home and was in no way imperiled.

An energized Daniel posted the findings on her blog in 2007, and woke up to the news plastered across European front pages.

Later on, a Le Soir journalist named Marc Metdepenningen tracked down Defonseca’s cousin Emma De Wael, who was still living in Belgium. When he asked if Monique had ran away from home at 7 years old, De Wael replied, “Good God, no! She stayed with the grandfather and grandmother.”

It turned out that her parents had truly been deported by the Nazis, but for being resistance fighters. Damningly, her father Robert cracked under pressure of interrogation and revealed all the names of his compatriots in exchange for getting to see his little girl one more time. He and his wife both died in a German concentration camp, and Defonseca became known in town as “the traitor’s daughter.”

The jig was up. In 2014, a Massachusetts appeals court judge forced Defonseca to hand over the $22.5 million she had previously been awarded. She still lives in the state with her husband, and refused to participate in the documentary about her life.

When her book was revealed to be bogus, Defonseca, who is now about 84 years old, released a statement: “They called me ‘The Traitor’s Daughter’ because my father was suspected of having spoken under torture. This book, this story, is mine. It is not the actual reality, but it was my reality, my way of surviving.”

As she told Le Soir in 2008: “I ask for forgiveness from all those who feel betrayed, but I beg them to put themselves in the shoes of a 4-year-old girl who had lost everything.”

Artist Gabriella Says Marilyn Manson Sliced Their Hands To Make A Blood Pact, Tied Her Up, And Raped Her
‘John and the Hole’ belongs in a ditch
Comment