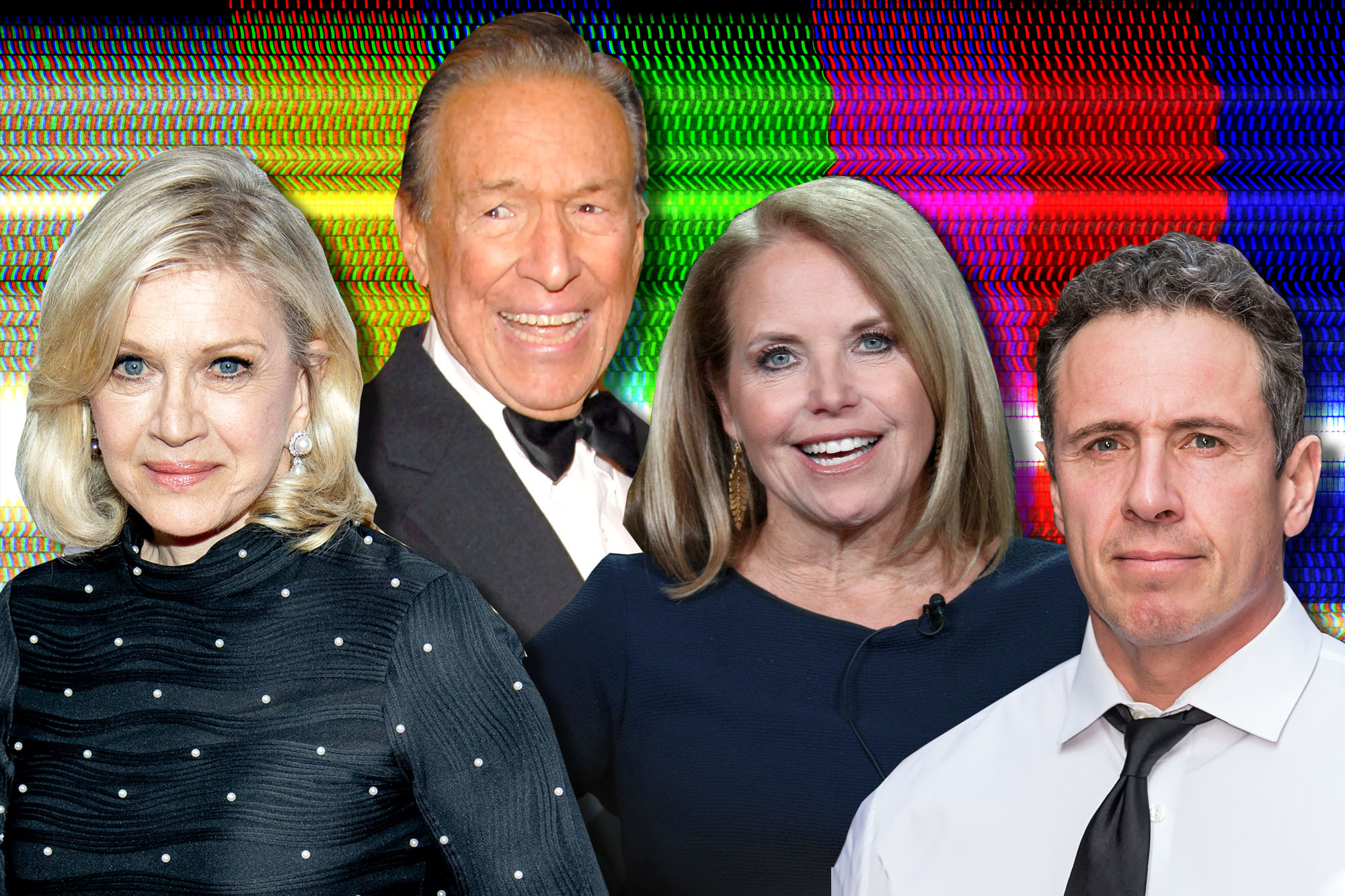 Right after getting hired at “60 Minutes,” Ira Rosen witnessed one of Mike Wallace’s signature meltdowns.

It was 1980 and Rosen, then 26, was on his first assignment for the legendary news program, investigating union violence in Los Angeles. The newly minted junior producer had spent weeks sweet-talking a federal investigator into agreeing to appear on camera with Wallace, CBS News’ top correspondent. But while Wallace was in transit to the West Coast, the source bailed out.

Senior producer Allan Maraynes broke the bad news as he drove Wallace into town from the airport, with Rosen in the back seat.

“Mike went crazy,” Rosen writes, grabbing fistfuls of documents from Maraynes’ briefcase and hurling them into his face as he struggled to keep the vehicle on the road.

“Wallace cursed Allan, told him that he was a failure as a producer, and that he would be demoted as soon as we returned to New York. It was the most astonishing verbal abuse I had ever witnessed.”

Later, a shell-shocked Rosen asked Maraynes how he withstood the tantrum.

“I tuned him out,” his colleague explained wearily. “If you are going to listen to everything he says, you will go crazy, so I figured out a way to go into a cone of silence.”

That incident set the blueprint for Rosen’s next four decades.

“I’d rather work with a talented asshole than a nice person without talent,” Rosen writes in “Ticking Clock” (St. Martin’s), out Feb. 16, his memoir about his career at “60 Minutes” and its competitors, ABC’s “20/20” and “Primetime Live.”

Luckily for him, the TV news business is stacked with talented assholes.

When Rosen joined “60 Minutes,” Wallace, then 62, was a journalism legend, known for his hard-hitting exposés and tough interviews that held wrongdoers’ feet to the fire. The CBS ad department made his reputation a slogan — “The four most feared words in the English language: Mike Wallace is here.”

When Ira Rosen was hired at “60 Minutes,” Mike Wallace was a legendary journalist with a tough reputation.CBS via Getty Images

“Unfortunately,” Rosen says ruefully, “that applied to those working with him as well.”

Wallace gave Rosen his big break, taught him the ropes of investigative journalism and provided a master class in interviewing and showmanship — all while spewing a constant barrage of invective and belittlement.

In public and in private, Wallace “seemed to define his life by how much trouble he could cause.” He delighted in loudly quizzing Rosen about his sex life when the two were out to dinner and wrecked Rosen’s wedding by whispering dark comments to the father of the bride (“Does she know what she is getting into?” he said, sighing deeply. “I have to tell you about him — wait, the wedding is starting”).

At the office, he was notorious for his “Neanderthal behavior” toward women, snapping their bra straps and slapping their bottoms. When one female producer reacted with a furious smack in the face, Wallace was perplexed.

“What the hell is her problem?” he wondered aloud.

Co-workers today “might call HR, hire an attorney, and threaten a very public lawsuit,” Rosen admits. “But in those days the possibility of such actions never even crossed my mind.”

Diane Sawyer (left) had a vicious rivalry with Barbara Walters — but they pretended to get along.The LIFE Picture Collection via Getty Images

Indeed, since Wallace left the airwaves in 2008, a string of CBS News correspondents and executives — including Charlie Rose, CEO Leslie Moonves, and “60 Minutes” boss Jeff Fager — have been ousted over allegations of sexual misconduct.

It wasn’t only underlings who got the Wallace treatment. He ran roughshod over his fellow correspondents, too, regularly poaching stories from colleagues Ed Bradley and Morley Safer.

“Mike would send his producers out to steal a source or a character who was key to a story, and then he would quickly film it before the other correspondent found out,” Rosen writes.

Safer, especially, took offense at these thefts. “Months would go by in which Safer would not speak to Wallace, even though their offices were next door to each other.”

Katie Couric’s short stint on “60 Minutes” left Rosen unimpressed, as she “thought she was smarter than all of us,” he writes in his new memoir.Getty Images

Picking fights with colleagues “gets your blood moving,” Wallace once told Rosen. “It makes you feel alive.”

Although Wallace’s behavior was extreme, he wasn’t alone. Rosen writes that the industry is rife with divas and head cases who make life miserable for their crews.

The “two-faced” Diane Sawyer was infamous for her behind-the-back insults. “If she was overly friendly and began to kiss you on the cheeks to say hello, chances are she was trashing you behind your back,” Rosen dishes.

Sawyer would be all smiles when she ran into Barbara Walters in ABC’s hallways, chuckling over rumors that the two were at odds — and dropping the act the moment Walters was out of range.

“Inside the elevator, Diane looked at me and said, ‘I hate that woman. Don’t believe a word she says. She knifes me any chance she gets,’ ” Rosen writes. “She had the look of someone who wanted vengeance.”

In 1998, when ABC execs made Sawyer and Walters co-anchors of a Sunday night show, their secret enmity made the forced collaboration a nightmare.

“They fought over who greeted the TV audience and who said good night,” Rosen recalls. After much negotiation, Walters was given welcome duties and Sawyer had responsibility for the sign-off. But no one could stop Walters from adding a final “good night” a moment after Sawyer bid the audience adieu, giving her the last word every week and enraging her on-air partner.

“They even counted the number of words each one had, introducing the stories,” Rosen writes. “It was a total disaster.”

Chris Cuomo, now a CNN anchor, brought little journalism experience — but a heaping helping of entitlement — to ABC when he landed a correspondent’s job there.

Chris Wallace didn’t speak to father Mike for a year after the older journalist stole a story from him.Getty Images

In 2003, execs at “Primetime Live” asked Rosen to mentor Cuomo in investigative journalism.

“I reluctantly agreed,” Rosen writes. “Cuomo greeted me with, ‘I understand that you are my new bitch.’ ”

“He lost me at hello,” Rosen recalls. “That son of a bitch Cuomo, I thought, he is definitely going to go far in this business.”

While his caustic arrogance was unwelcome at ABC, Cuomo made it part of his act on cable.

‘I hate that woman. Don’t believe a word she says.’Diane Sawyer on rival colleague Barbara Walters

“Lazy and disengaged, and thought she was smarter than all of us who worked on the show,” he judges. “She wasn’t.”

In 2008, at the height of Hillary Clinton’s presidential primary battle with Barack Obama, “60 Minutes” scored a coup: Both candidates agreed to let the show behind the scenes of their campaigns to film twin segments that would run in the same Sunday night slot. Couric was assigned the Clinton interview.

But while producers wanted to challenge the former first lady with weighty questions, Couric was determined to go with her trademark perkiness. She tossed Rosen’s script and went for the fluff.

“How do you do it? … I’m talking about pure stamina,” Couric began as Rosen steamed on the sidelines.

Clinton answered with a laundry list of grandmotherly inanities: “I take vitamins. I drink tea, not coffee anymore … Wash your hands all the time. And if you can’t, use Purell.”

“The interview went downhill from there,” Rosen gripes. “I kept thinking, ‘For this, they are paying Katie $15 million a year?’ ”

Mike Wallace never mellowed with age. At ABC, Rosen partnered with Chris Wallace, who had a fractious relationship with his father both personally and professionally.

“I now found myself in the weird position of passing along the lessons I learned from his father to his son,” Rosen recalls.

In 1997, as Chris Wallace prepared a story on comedian Chris Rock, his father derailed it — by convincing Rock to do a sit-down with him instead, since “60 Minutes” had better ratings.

“This was a betrayal on so many levels. I felt I had to call Mike,” Rosen writes.

Rosen begged him to reconsider, saying, “Your choice is simple. You can have Chris speak at your funeral, or you can do the profile of Chris Rock.”

“Fifteen minutes later, Mike called. ‘I solved the problem. I gave the story to Ed Bradley.’ ”

Father and son did not speak to one another for nearly a year.

But when Mike Wallace died in 2012 at 93 years old, Chris still paid tribute to his father:

“My dad was everything you saw on television: fascinating and funny, challenging and exasperating,” he said in a statement. “And while work often came first for him, over the last 20 years, he worked hard to make connections with his family. He became my best friend.”