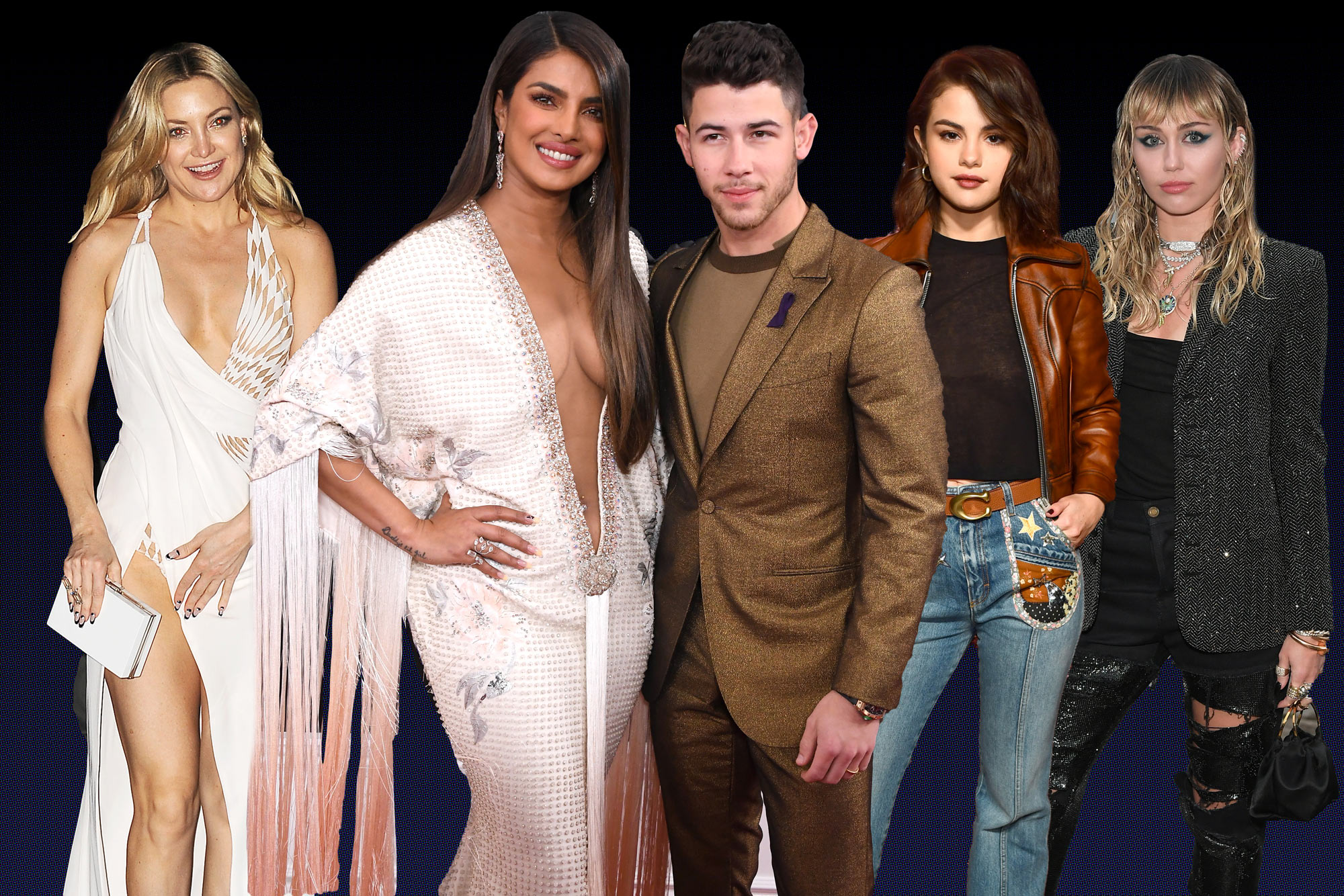 He’s a “sucker” for lots of famous ladies.

Nick Jonas had his fair share of Hollywood hookups before he married his wife Priyanka Chopra in December 2018.

The couple, who have a 10-year age gap, celebrated their nuptials with a lavish 3-day wedding celebration in India.

They were also spotted in Beverly Hills getting their marriage license ahead of the big day.

As Page Six previously reported, they got engaged in July 2018 after just two months of dating.

Before he was wifed up, the youngest Jonas Brother had a string of Hollywood gal pals.

Page Six is breaking down Nick’s girlfriends past and the road he took to marital bliss.

He came in like a wrecking ball … and then left shortly after.

Miley Cyrus and Jonas began dating in 2006 when they were both 13 years old after meeting at a charity event.

Jonas then joined Cyrus on her “Best of Both Worlds” tour as an opening act with the Jonas Brothers.

The “Hannah Montana” alum even wrote her song “7 Things” about Jonas. Years later, Jonas admitted his song “Wedding Bells” was about Cyrus.

But things didn’t last long for the tweens: Despite being musical inspirations for each other, the young lovebirds called things off in December 2007.

The heart wants what it wants, and back then, it was Nick Jonas.

Selena Gomez and Jonas began dating in 2008. She even appeared in the Jonas Brothers’ music video for “Burnin’ Up” that year.

Also burnt up: Their relationship. The two split after a few months of dating in 2009 and briefly rekindled their relationship the following year before breaking things off again for good shortly after.

The “Good For You” singer opened up about dating the same guy as Cyrus, telling W Magazine in 2016, “We never feuded. We both liked the same guy when we were 16 … We are now completely settled in our own lives.”

Jonas began his pattern of dating older women when he linked up with Delta Goodrem back in 2011.

The Australian singer, who is 8 years older than Jonas, dated him for 10 months before calling things off in February 2012.

Five years later the exes fueled rumors that they were back together when Jonas shared a photo with Goodrem to his Instagram, but the gossip never amounted to anything and it seemed they were just friends.

The former Miss Universe went on to star in the Jonas Brothers’ music video for their hit song “Jealous” in 2014.

He later admitted that he wrote the song about Culpo, telling Wendy Williams at the time, “We went out one night and this guy was looking at her for a little too long … I really got into it and then I decided to … just process this a different way and go into the studio and write this song.”

They broke up in June 2015 after dating for two years, Us Weekly reported.

Kendall Jenner and Jonas were rumored to have had a brief fling in 2015.

They were reportedly set up by Jenner’s close pal Gigi Hadid, who was seeing the singer’s brother Joe at the time.

While they never publicly admitted to their relationship, Nick did admit to E! news at the time that he and Jenner would hang out with Hadid and his brother.

Jonas found himself involved with an older woman yet again when he started seeing Kate Hudson, who is 13 years his senior.

As Page Six reported in September 2015, the duo started hanging out together, fueling rumors that they were a couple. A source even claimed to TMZ that they “absolutely hooked up,”

But an insider told Page Six at the time, “They’re hanging out, but they’re not dating.”

While they enjoyed a few outings together in Miami and Disneyland, their fling didn’t amount to much, though Jonas did open up about his respect for Hudson.

“Kate’s incredible. We had an unbelievable connection as two humans who just admire things about each other, and see something in each other that’s beautiful,” he told Complex in January 2016. “Out of my best effort to respect her and her privacy, I’m not going to say if we had sex or not. But we did have a beautiful connection. Even now I have so much admiration and respect. She’s amazing.”

The pop star then moved on from Hudson with Lily Collins.

He opened up about dating the “Emily In Paris” star in May 2016.

“We went out a couple of times. She is amazing,” he told The Sun at the time. “We have known each other for years, just running in the same circles.”

Her dad, however, seemed to be under the impression that they were just friends.

“[I’m] not sure what Nick looks like,” Phil Collins told Yahoo when asked about the potential romance. “But Lily called me the other day and she was in Mammoth where all this was happening. ‘I’m here with a friend,’ she told me and said it’s not serious. It’s just friends.”

Thing eventually fizzled for the stars.

He had Georgia on his mind.

Jonas was reportedly romantically involved with Georgia Fowler in 2016.

A source told Us Weekly at the time that they were “casually dating.”

The duo was seen attending the engagement party of Joe Jonas and Sophie Turner in New York City that November, where they reportedly “cuddled in a corner.”

But his romance with the Victoria’s Secret model didn’t go much further than that.

Priyanka Chopra and Nick Jonas at the 2020 Grammy Awards.Getty Images

Jonas began dating Priyanka Chopra in May 2018 after they were spotted out together on several occasions.

Things quickly escalated from there and by August that year they were engaged after just two months of dating.

The pop star opened up about his relationship with Chopra shortly after, telling Jimmy Fallon on the “Tonight Show,” “We met through a friend, so we got connected first over text and we started talking for a while, and it was about six months before we met up in person.”

By December, they were husband and wife.

Eliza Dushku is pregnant, expecting baby No. 2 with Peter Palandjian
Who is Sia? Inside the singer’s weird world
Comment