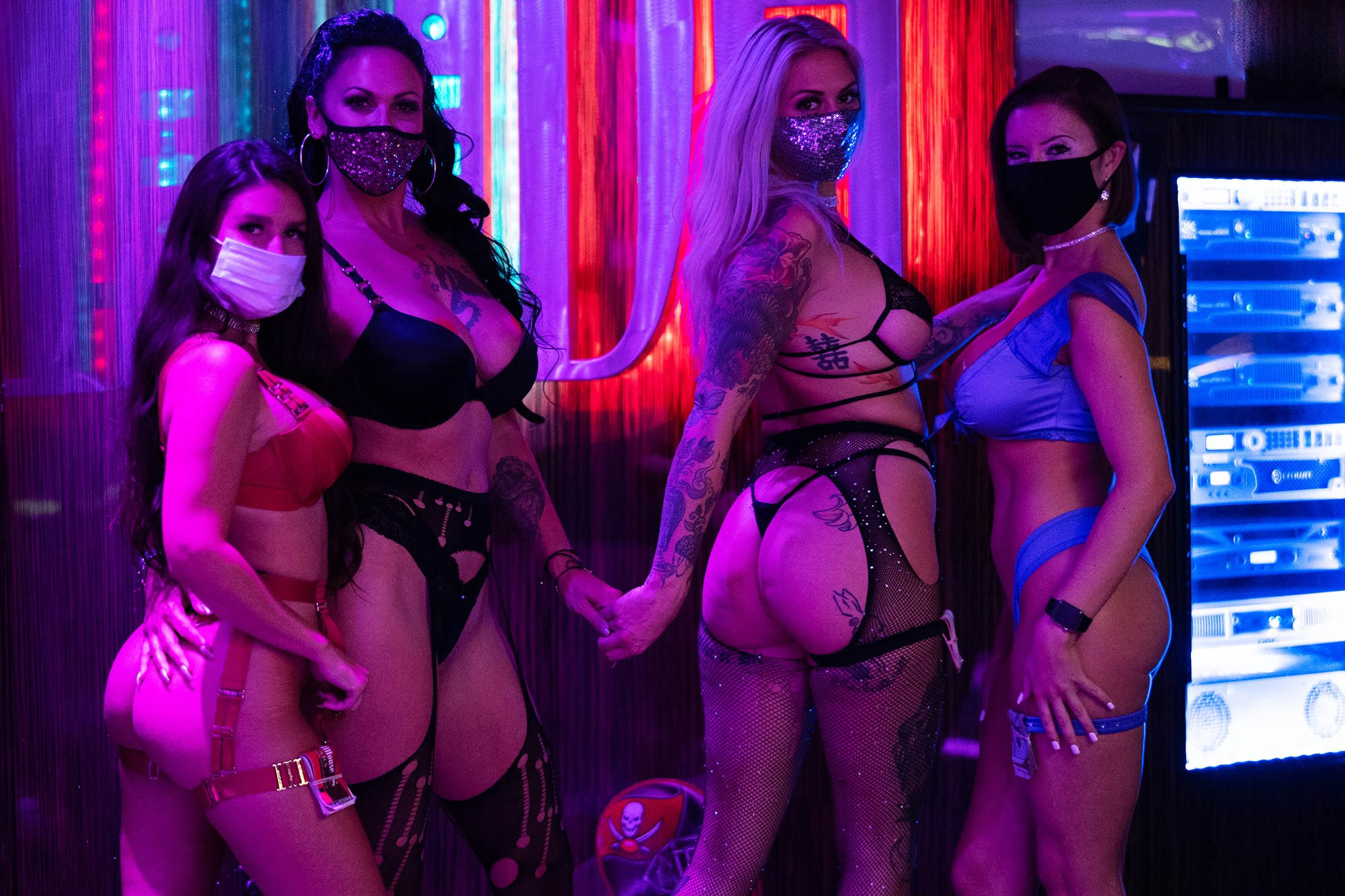 The Penthouse Club in Tampa, Fla., was so pumped the Super Bowl was landing in their city this year, they shut down in early March 2020 to undergo a $2 million renovation.

After all, the big game and strip clubs have long been inextricably tied: Dancers usually make a mint disrobing in the host city’s clubs, in some cases clearing as much as $15,000 a night. And Tampa is widely considered the jiggle-joint capital of the country, with dozens of venues in the area.

It was smart planning — in 2013, when New Orleans hosted the Super Bowl, the Penthouse Club’s NOLA location pulled in a half-million dollars over four days — until COVID-19 struck. “We sank all of our working capital into an event we didn’t know was guaranteed to happen,” Caroline Kirkendoll, vice president of the Penthouse Club, told The Post.

The Penthouse Club in Tampa, Fla. is ready to entertain horned up Super Bowl fans.Maciel / BACKGRID

“We’re open and we’re going to stay open,” Joe Redner, owner of the legendary Mons Venus, told The Post. “Our employees say they feel safer here than they do at home, because we have masks, disinfectant and we installed UV lights in the ductwork. But this is a new experience for me: a Super Bowl in a pandemic.”

While Florida has been generally less Draconian with its restrictions than other states, the city of Tampa requires face coverings in any indoor business, and last week, Mayor Jane Castor extended the mask mandate to outdoor areas where people are expected to gather for Super Bowl-related events.

“The executive orders don’t have a ton of industry-specific recommendations and don’t call out adult entertainment in any way. The mayor has an uphill battle [keeping everyone safe and healthy in a party atmosphere], so we are implementing strict rules,” said Kirkendoll.

The Penthouse Club’s staffers will have their temperatures checked regularly and must wear masks whether they’re serving drinks or showing off their talents on the main stage. To manage crowds and enforce social distancing, the club removed single chairs and is taking table reservations only.

Masks are required at The Penthouse strip club.Maciel / BACKGRID

It’s also erecting a 3,000-square-foot tent filled with the leather furniture from the chain’s Louisiana sister locations, which have been mostly shut down since last spring. The tent, with one side open to bring in airflow, will give the club more real estate for a higher customer capacity.

“The side that faces the street will be covered, because we don’t want any traffic accidents,” said Kirkendoll. “Everything we are losing with social distancing, we’re hoping to to recoup it by having this parking lot situation.”

The Penthouse Club’s staffers will have their temperatures checked regularly.Maciel / BACKGRID

In simpler, pre-COVID times, all you needed was a stack of cash and a lap to get a lap dance. But now patrons (as well as the entertainer) will also be required to mask up for the intimate transaction.

“We’re doing everything that they recommend. Except the dancer and the customer can’t stay 6 feet apart. But they have to be wearing masks,” said Redner, who will be distributing free masks to Mons Venus patrons.

Besides taking place in a pandemic, this Super Bowl will also be the first in which one of the teams is playing in its home stadium — adding another layer of celebration to the week.

The Dollhouse strippers in Tampa are gearing up for a busy Super Bowl.Benjamin Peacock

“This Super Bowl has lifted the black cloud for Tampa for the time being,” Warren Colazzo, co-owner of Thee Dollhouse, told The Post. “I know it sounds crazy, but it’s given people hope. I’ve noticed since the Bucs won, even at the gas station, everyone is smiling and happy.”

Colazzo, 69, has installed a 250-inch video screen with an updated sound system. He also hired extra security, but not because he’s expecting fights.

“There will be a crowd out front, so my security will be making sure people are wearing their masks and social distancing. We’re going to be tough on our front door,” he said, noting that his gentleman’s club has a history with Tampa Super Bowl legends.

The Dollhouse is gearing up for crowds, and will have security on hand.Benjamin Peacock

Thee Dollhouse opened in 1991 just before the city hosted that year’s Super Bowl, which ended with the New York Giants defeating the Buffalo Bills. “Lawrence Taylor and Jim Kelly announced the amateur contest here,” he said, adding that it was another era. “With all of the cellphones nowadays, athletes have to be careful. But Jim Kelly promised me a game ball. He came in on Monday at 3 p.m. with it signed by the whole team.”

Colazzo plans to keep the club at 100 percent capacity, but breast watchers need to be sitting down, so he’s added extra bar stools.

Hand sanitizer will be available at The Dollhouse strip club.Benjamin Peacock

He’s also limiting his roster of dancers to his usual performers to reward them for sticking with him through the pandemic. “I have a wonderful staff who risk their lives working through COVID. I am not going to put 100 girls out on the floor like other clubs. I want to take care of the people who took care of Thee Dollhouse.” This week, he will have 60 dancers a night.

All three club owners are unsure what their bottom line will look like compared to a typical Super Bowl week. But after they’ve seen COVID-19 devastate the hospitality industry across the country, they’re all simply happy to be able to operate.

“The fact that we are open — they are allowing fans in the stadium and live adult entertainment to happen — we are trying to see it as a win,” said Kirkendoll.

Colazzo agreed: “The difference between this and other Super Bowls is that it was always about money. We are open, whether we make $1,000 less or more, I don’t care. I have friends with clubs in other cities who have gone broke because they are shut down. I really respect the mayor and the governor.” He added, “I mean this from the bottom of my heart. We are blessed.”

Workers are The Dollhouse are happy to be back.Benjamin Peacock