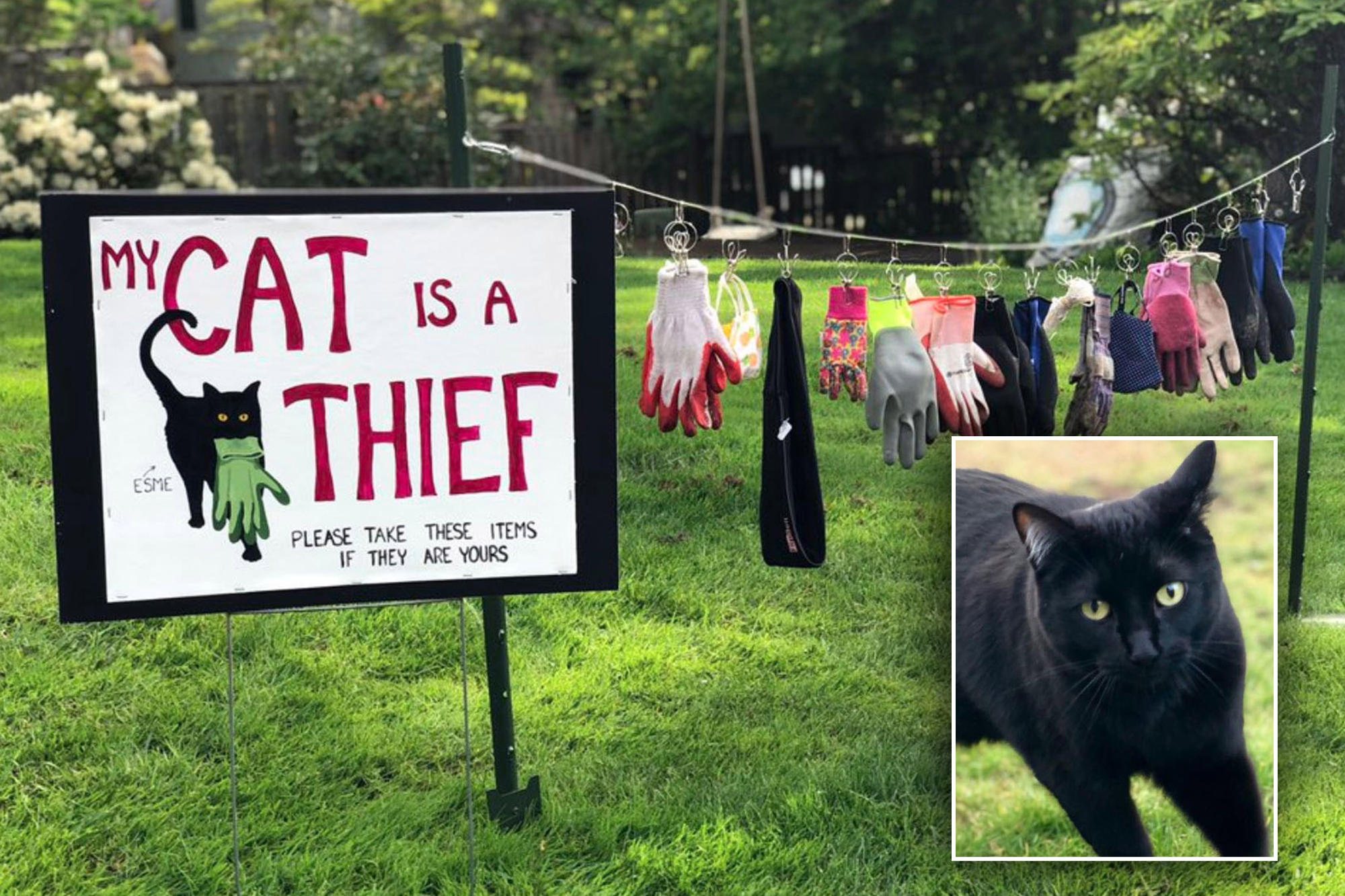 An Oregon woman devised an unorthodox way to pay penance for her thieving feline — by posting a sign asking neighbors to reclaim items snatched by her klepto kitty, Esme.

“The neighbors in my community know where to look for their stuff,” Beaverton’s Kate Felmet, 50, told Today of the marker, which reads “my cat is a thief” alongside a picture of Esme clutching a glove in its mouth. Dangling from a clothesline next to it are gloves and other pilfered belongings, which Felmet encourages the rightful owners to take back.

She had had previously returned the items during door-to-door “apology rounds,” Insider reported.

Felmet, an ICU doctor, dreamt up the unusual method of giving re-purr-ations after noticing that the furry scavenger had been pilfering her neighbors’ stuff over the past few years.

Esme’s scavenging spree began in the summer of 2019, when she began bringing birds and pieces of trash back to the house as gifts. Then, at the start of the pandemic, the cat klepto started curating her collections by retrieving discarded masks like a furry Bowerbird. Esme reportedly amassed as many as 11 face covers in one day at the height of her PPE pilfering run.

“It does seem like she has some sort of uncanny ability to bring on stuff that has to do with what we’re doing at the time,” said Felmet of her discerning hoarder. The proud owner even recounted one time when Esme brought her tape and paint roller covers while she was painting her daughter’s bedroom.

Esme’s pastime took an unfortunate turn this past April, however, when the opportunistic pet started stealing pairs of gloves in a bid to help her owner with gardening.

“One week in late April, she brought two pairs per day,” Felmet said. “At the end of the week, I had 14 pairs, and I thought that if I didn’t do something about it I’d be swamped by the end of the summer.”

That was the cat-alyst for the pet parent’s unconventional return policy, which after being in place for only around a month, has helped facilitate the return of 10 pairs of gloves, several masks, and a running belt with their original owners

“A few things have gone back,” explained the relieved cat mom, recalling one time where a school bus drove by “and the guy got out and got a few things.”

Esme the “cat burglar” on the move. Jam Press/Kate Felmet

Thankfully, the neighbors “mostly seem amused” by her Esme’s thieving ways, according to Felmet.

Although she admits things are still “awkward with the family from whom Esme has stolen the same pair of kneepads out of their garage three times.”

Esme’s not the first animal with a penchant for pilfering other people’s belongings. This past March, a brazen dog was filmed snatching an Easter basket off a Texas family’s doorstep.